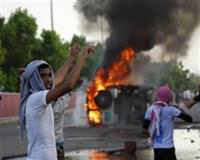 Anti-government protests inspired by popular revolts that toppled rulers in Tunisia and Egypt are gaining pace around the Middle East and North Africa despite political and economic concessions by nervous governments.

Clashes were reported in tightly controlled oil producer Libya, sandwiched between Egypt and Tunisia, while new protests erupted in Bahrain, Yemen, Iran and Iraq on Wednesday.

The latest demonstrations against long-serving rulers came after U.S. President Barack Obama, commenting on the overthrow of Egyptian President Hosni Mubarak, declared: "The world is changing...if you are governing these countries, you've got to get out ahead of change, you can't be behind the curve."

With young people able to watch pro-democracy uprisings in other countries on satellite television or the Internet, and to communicate with like-minded activists on social networks hard for the secret police to control, authoritarian governments across the region have grounds to fear contagion.

Protests spread across Yemen on Wednesday demanding an end to the president's three decades in power, and a 21-year-old demonstrator died in clashes with police in the south, witnesses and medical sources said.

In Sanaa, capital of the Arabian Peninsula state, hundreds of government loyalists wielding batons and daggers jumped out of cars to chase around 800 protesters marching in the streets.

President Ali Abdullah Saleh, a U.S. ally against al Qaeda who has been in power in fractious Yemen for 32 years, was quoted by the state news agency as saying the unrest was a foreign plot to foment chaos in Arab countries.

Saleh has pledged to step down when his term expires in 2013 and offered dialogue with the opposition, but radical protesters are demanding he go now.

In Bahrain, protesters poured into the center of the capital Manama on Wednesday for the third successive day to mourn a demonstrator killed in clashes with security forces on Tuesday.

The emirate has a history of protest over economic hardship, the lack of political freedom and sectarian discrimination by the Sunni Muslim rulers against the Shi'ite majority.

Some 2,000 protesters demanding a change of government were encamped at a major road junction in Manama, seeking to emulate rallies on Cairo's Tahrir Square that toppled Mubarak.

Though itself only a minor oil exporter, Bahrain's stability is important for neighboring Saudi Arabia, where oilfields are located in an area populated by an oppressed Shi'ite minority.

In Iran, supporters and opponents of the hardline Islamic system clashed in Tehran during a funeral procession for a student shot at an anti-government rally two days ago, state broadcaster IRIB reported.

Both sides claimed Sanee Zhaleh was a martyr to their cause and blamed the other for his death.
Monday's rallies in Tehran and several other Iranian cities were the first staged by the Green pro-democracy movement since security forces crushed huge protests in the months after President Mahmoud Ahmadinejad's disputed 2009 re-election.

Hundreds of opponents of Libyan leader Muammar Gaddafi, in power since 1969, clashed with police and government supporters in the eastern city of Benghazi in Wednesday's early hours, a witness and local media said.

Reports from the port city, 1,000 km (600 miles) east of the capital Tripoli, said protesters armed with stones and petrol bombs set fire to vehicles and fought with police in a rare outbreak of unrest in the oil-exporting country.

Gaddafi's opponents used the Facebook social network to call for protests across Libya on Thursday.

In Iraq, three people were killed and dozens wounded in the southern city of Kut as protesters demanding better basic services fought with police and set government buildings on fire, hospital and police sources said.

Some shouted, "Down, down (Prime Minister Nuri al-) Maliki's government, down, down with corruption," echoing rallies that have buffeted other parts of the Arab world, although Maliki unlike other Arab leaders was democratically elected.

Iraq is still struggling to get back on its feet almost eight years after the U.S.-led invasion that toppled dictator Saddam Hussein. Infrastructure is dilapidated, electricity is in short supply and jobs are scarce.

Rulers in several countries, drawing lessons from events in Tunisia and Egypt, have announced political changes and moved to cut prices of basic foodstuffs and raise spending on job creation in efforts to pre-empt spreading unrest.

Algerian President Abdelaziz Bouteflika promised to lift a 19-year-old state of emergency soon and has acted to reduce the cost of staple foods in the North African oil and gas exporter.

Authorities deployed an estimated 30,000 police in Algiers on Saturday to prevent a banned pro-democracy march. Several hundred protesters defied the ban and dozens were detained.

A coalition of civil society and human rights groups and an opposition party vowed afterwards to demonstrate every Saturday until the military-backed government is removed.

Morocco, where the main banned Islamist opposition movement warned last week that "autocracy" would be swept away unless there were deep democratic reforms, announced on Tuesday it would almost double state subsidies to counter an increase in commodity prices and address social needs.

Syria, controlled by the Baath Party for the last 50 years, released a veteran Islamist activist on Tuesday after he went on hunger strike following his arrest 11 days ago for calling for Egyptian-style mass protests, human rights activists said.

Jordan's King Abdullah has sacked his prime minister and appointed a new government led by a former general who promised to widen public freedom in response to anti-government protests.

Countries with oil and gas wealth such as Saudi Arabia and Algeria appear better placed than poorer countries like Egypt and Tunisia to buy social peace.