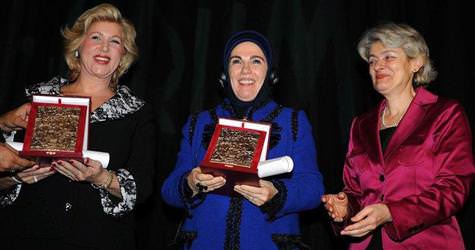 Awarded for her contributions to furthering community and democratic standards, Emine Erdoğan states, "I am accepting this award on behalf of all women in Turkey and am dedicating it to them.”

Prime Minister Erdoğan's wife, Emine Erdoğan, was awarded the "Prix de la Fondation" in Brussels by one of the leading international forums, the Crans Montana Forum.
International politicians, academics and leading intellectuals were amongst those in attendance of the award ceremony hosted by Belgium's Deputy Prime Minister Didier Reynders. Also present was State Minister and Chief Negotiator Egemen Bağış, who accompanied Emine Erdoğan on her trip to Brussels, where she was handed her award by UNESCO General Director İrina Bakova.
The award ceremony, which was held in collaboration by UNESCO and the Islamic Educational, Scientific and Cultural Organization ISESCO, was held in Brussels yesterday.
While Erdoğan dedicated her award to Turkish women during her acceptance speech she also touched upon the uprisings which began in Tunisia that then moved on to Egypt. During Erdoğan's address in the forum panel, she stated that the EU provided benefits for Turkish women. "I dedicate this award to Turkish women who have been the pioneers of peace and freedom in the region."
Touching upon the recent developments in the Middle East, Erdoğan stated; "The struggle of women in Cairo and Tunisia is at the same time a struggle for justice. The struggle of women in Gaza is more that a struggle for freedom, it just as much a struggle for children, for bread and for existence. No matter where in the world, for those whose freedom and peace are in danger, for those whom democracy is a luxury, their struggle is our struggle to. I would like you all to know that we must reject any double standards, discrimination or special conditions or geography in this struggle.
'YOU ARE THE SYMBOL OF PROGRESS'
Expressing that the rights bestowed on those living in the north should be just the same as those belonging to those in the south, and that those in the east should be deemed just as deserving of the universal standards in place in the west, Erdoğan went on to state; "In this 21st century globalizing world, it is racist and outdated to rate democracy based on someone's skin color or beliefs. To deem one group of people as deserving of democracy and another as it being 'too soon' goes against the fundamentals of democracy. Women's rights should not be abandoned due to their geography, the powers at be and fears of security in certain regimes."
As the Chairman of Crans Montana Jean Paul Carteron handed the award to Emine Erdoğan, he praised both Turkey and Erdoğan. Carteron stated; "It is especially important for you to receive this award because, you are a woman. If your husband has to make a difficult political decision, then you can provide a humanistic perspective. You are the symbol of future progress."