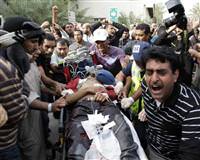 "Police are coming, they are shooting teargas at us," one protester said by telephone as police swooped at 3 a.m.. Another said: "I am wounded, I am bleeding. They're killing us."

Upwards of 40 army trucks and armored vehicles, including at least one tank, later deployed in and around Pearl square, a road junction demonstrators had tried to turn into a protest base like Cairo's Tahrir, a Reuters photographer said.

The crackdown by the Bahraini authorities appeared designed to snuff out the protests before they could gather momentum, unlike the sustained unrest that unseated Egypt's Mubarak.

The main Shi'ite bloc Wefaq, which holds 17 of parliament's 40 seats, planned to quit the assembly in protest. "We feel there was a decision to hurt people," MP Ibrahim Mattar said.

"All the members are going to resign. The decision is taken," he told Reuters.

Mattar said about 60 people were missing, hours after the police raid. "Are they in prison or did they escape and are now hiding in houses? We don't know," he said, adding that his figure was based on calls received from worried relatives.

Thousands of overwhelmingly Shi'ite protesters, emboldened by uprisings in Egypt and Tunisia, took to Bahrain's streets three days ago demanding more say in the Gulf Arab kingdom where a Sunni Muslim family rules over a majority Shi'ite population.

Wefaq lawmakers said three people had been killed and 100 wounded in the police attack on Pearl Square, bringing the overall death toll to five since protests began. Reuters could confirm 45 wounded. The government has given no casualty toll.

Bahrain's Interior Ministry said that security forces had cleared the Pearl roundabout of demonstrators, and that a section of a main road was temporarily blocked.

"This is real terrorism," said Wefaq MP Abdul Jalil Khalil. "Whoever took the decision to attack the protest was aiming to kill."

"I am deeply concerned by events in Bahrain last night and by level of violence at Pearl Roundabout and urge all sides to avoid violence and for the police to exercise restraint," he said in a statement released by the British embassy in Manama.

"It is important that all those injured have immediate access to medical treatment. It is crucial that the Bahraini Government moves quickly to carry out its commitment to a transparent investigation into earlier deaths and extends this to include today's events and any alleged human rights abuses."

King Hamad has offered condolences to relatives of the two men killed on Monday and Tuesday, and said a committee would investigate. The government says it has detained those thought to be responsible for the killings.

The police raid was short and sharp. Within 20 minutes protesters had fled, leaving tents, blankets and rubbish behind them as teargas wafted through the air, a Reuters reporter said.

One protester said he had driven away two people who had been wounded by rubber bullets.

A teenager shepherded a sobbing woman into a car, saying she had been separated from her two-year-old daughter in the chaos. At a main hospital, about 200 people gathered to mourn and protest, some shouting slogans against the ruling family.

Helicopters later clattered over the city and tow-trucks dragged away cars abandoned by protesters, their tires squealing on the tarmac because the brakes were still on.

On Wednesday the Wefaq party demanded a new constitution that would move the country toward democracy.

"We're not looking for a religious state. We're looking for a civilian democracy ... in which people are the source of power, and to do that we need a new constitution," its secretary-general Sheikh Ali Salman told a news conference.

Elsewhere in Manama, life went on as usual. In one upscale area, foreigners were sipping cappuccinos in street cafes or strolling past in jogging clothes.

The religious divide that separates Bahrain's ruling family from most of its subjects has led to sporadic unrest since the 1990s, and the country's stability is being closely watched as protest movements blow through North Africa and the Middle East.

Bahrain, a small oil producer, is more prone to unrest than most of the Gulf Arab region where, in an unwritten pact, rulers have traded part of their oil wealth for political submission.

Regional power Saudi Arabia, and the United States -- which bases its Fifth Fleet in Bahrain -- both view the ruling Khalifa family as a bulwark against Shi'ite Iran.

King Hamad bin Isa al-Khalifa introduced a new constitution giving Bahrainis more political rights a decade ago, but the opposition says he has not gone far enough to introduce democracy. Most of the cabinet are royal family members.

Demands have mounted that the king fire his uncle, Khalifa bin Salman al-Khalifa, who has been prime minister since the modern state was founded in 1971. Wefaq members say they want elections for prime minister.

Protesters' wrath had already been stirred up by the deaths of two of their number during this week's demonstrations, the second killed in clashes at the funeral of the first.

"The people demand the fall of the regime," protesters chanted at the hospital, echoing a slogan of Egyptians who ousted President Hosnia Mubarak last week after an 18-day revolt.

Protesters who on Wednesday had expressed confidence they were secure in the square, said they had no idea the police would bust in and forcibly break up their encampment.

"There was no single warning," one demonstrator said. "It was like attacking an enemy. People were sleeping peacefully."