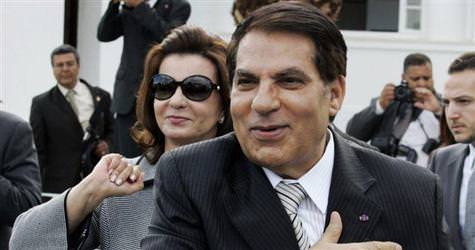 Overthrown Tunisian dictator Bin Ali has suffered a cerebral hemorrhage due to distress. Meanwhile, ousted Egyptian dictator Mubarak has told those close to him that he is “waiting for Azrael.”

After escaping the uprising in Tunisia by taking shelter in Saudi Arabia, 74-year-old Bin Ali suffered from a brain aneurism yesterday most likely triggered by the recent upset. Suffering from a coma, Zeynel Abidin Bin Ali is being treated at a hospital in Jeddah that serves the royal family.
ALONE IN HIS HOSPITAL ROOM
It turns out; Bin Ali's wife Leyla Trabelsi has left the former leader. Relying on Muammar Qaddafi's friendship, Trabelsi arrived to Libya then later fled to Dubai after the uprising also surfaced in Libya. Tunisia's interim leader Foued Mebazaa has confirmed that Bin Ali is indeed in a coma.
HOSNI MUBARAK REFUSES TREATMENT
Suffering from pancreatic cancer, Mubarak has refused to go to Germany for treatment and states; "I will die in Sharm El Sheikh." According to Asharq Al Awsat newspaper, the 82-year-old former Egyptian dictator is acting against doctors' orders and is awaiting his death.
Arab world enflamed
The revolts in the Middle East have now moved on to Bahrain and Libya. In Libya, what was announced as a 'Day of Rage' resulted in the deaths of 14 during protests. Meanwhile, conflict in Bahrain has resulted in four people dying and 60 missing.
As Mubarak's condition continues to worsen and he insists on not receiving treatment, Bin Ali was physically unable to withstand the pressure and is now in a coma. Bin Ali did not resist the Tunisian uprising for long and hastily fled the country. Hosni Mubarak stubbornly resisted stepping down and is now supposedly showing a similar attitude regarding his health. It was announced yesterday for the first time on Tunisian expert correspondent for French daily Le Monde Nicolas Beau's blog that the 74-year-old overthrown leader 'may be in a coma.' According to Beau, on Tuesday, February 15th, Bin Ali suffered a 'cerebral hemorrhage' and was admitted to a hospital in Jeddah that solely treats Saudi princes. Beau wrote that he was immediately taken to the hospital when he suffered paralysis and was admitted under a different name. Beau also wrote that he remains to be in critical condition.
Foued Mebazaa whom has been temporarily appointed as acting state leader has also noted his knowledge of Bin Ali's condition.
A WORSENING CONDITION
According to the London based Saudi Asharq Al Awsat newspaper, the former Egyptian president Mubarak is also in increasingly poor health and is supposedly rejecting medical treatment. According to the daily, the 82-year old is rejecting the suggestion he receive treatment in Germany.