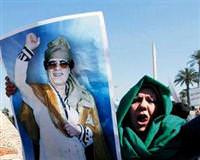 Two of the Middle East's most entrenched rulers were battling to stay in power on Saturday amid reports of dozens of protesters killed in Libya and an offer of talks by Bahrain's king being rebuffed.

Unrest has spread from Tunisia and Egypt to Bahrain, Libya, Yemen and Djibouti, presenting the United States with the dilemma of maintaining stability in the oil-rich region while upholding the right to demonstrate for democratic change.

Protests against Gaddafi's rule this week, inspired by the uprisings in Tunisia and Egypt, were met with a fierce crackdown, but restrictions on the media have made it difficult to establish the full extent of the violence.

New York-based Human Rights Watch said the killings on Friday took to 84 its estimate for the death toll over three days of protests -- most of its focused in the restive region around Benghazi.

It said the deaths in the city, 1,000 km (600 miles) east of Tripoli, happened when security forces opened fire on people protesting after funeral processions for people killed in earlier violence. There has been no official word on the number of dead.

"We put out a call to all the doctors in Benghazi to come to the hospital and for everyone to give blood because I've never seen anything like this before," the group quoted a senior hospital official as saying.

"Special forces who have a very strong allegiance to Gaddafi are still fighting desperately gain to control, to gain ground and the people are fighting them street by street," said a resident of Benghazi identified as Mohammed by the BBC.

In Bahrain, a key U.S. ally and home to the U.S. Middle East fleet, the main Shi'ite opposition bloc has rejected a dialogue call from the king after this week's unrest in the island, a Shi'ite ex-lawmaker said on Saturday.

"We don't feel there is a serious will for dialogue because the military is in the streets," Ibrahim Mattar, a member of the Wefaq bloc which quit parliament on Thursday, told Reuters.

Mattar said the authorities would have to "accept the concept of constitutional monarchy" and pull troops off the streets before any dialogue could begin.

"Then we can go for a temporary government of new faces that would not include the current interior or defense ministers," he said.

Bahrain's king offered a national dialogue with all parties on Friday to try to end the unrest which has cost six lives and hundreds of other casualties since Monday.

More than 60 people were in hospital on Saturday being treated for wounds sustained when Bahraini security forces fired on protesters as they headed to Pearl Square the previous day.

U.S. President Barack Obama spoke with the king on Friday evening, condemning the violence and urging the government to show restraint. Obama said the stability of Bahrain, next to Saudi Arabia, depended upon respect for the rights of its people, according to the White House.

The government is led by the Sunni Muslim Al Khalifa dynasty, but the majority Shi'ite population has long complained about what it sees as discrimination in access to state jobs, housing and healthcare, a charge the government denies.

The spreading contagion of unrest -- particularly worries about its possible effects on the world No. 1 oil producer, Saudi Arabia, helped drive Brent crude prices higher this week before other factors caused them to slip on Friday.

It was also a factor in gold prices posting their best weekly performance since December.

Analysts say a key difference between Libya and Egypt is that Gaddafi has oil cash to smooth over social problems.

Gaddafi is also respected in much of the country, though less so in the Cyrenaica region around Benghazi.

"For sure there is no national uprising," said Noman Benotman, a former opposition Libyan Islamist who is based in Britain but is currently in Tripoli. "I don't think Libya is comparable to Egypt or Tunisia. Gaddafi would fight to the very last moment," he said by telephone from the Libyan capital.

Doctors said four people died from gunfire in the southern port of Aden, where resentment against rule from Sanaa runs high. One was killed by a grenade in Taiz, Yemen's second city.

At least 11 people were wounded in Aden, where thousands of protesters angered by what they said was excessive force by security forces stayed in the streets for hours.

Hundreds of protesters later staged a sit-in in the center of Aden to protest against the killing of demonstrators.

Saleh, a U.S. ally against a Yemen-based al Qaeda wing that has launched attacks at home and abroad, is struggling to end month-old protests flaring across his impoverished country.

Tens of thousands of dissidents also thronged the city of Taiz, 200 km (130 miles) south of Sanaa, the capital. One was killed and 28 were wounded, three critically, when a hand grenade thrown from a car exploded in the crowd, doctors said.

Anti-government protesters watched over by riot police took to the streets of Djibouti city after Friday afternoon prayers calling for President Ismail Omar Guelleh, whose family has held sway in the small Horn of Africa nation since independence from France in 1977, to step down, media reported.

Guelleh took office in 1999 and is expected to run for a third term when his mandate expires in April 2011.

Djibouti, a former French colony which separates Eritrea from Somalia, hosts France's largest military base in Africa and a major U.S. base. Its port is used by foreign navies patrolling busy shipping lanes off the coast of Somalia to fight piracy. Unemployment runs at about 60 percent.

"IOG out" read one banner, using the president's initials.

About 300 people demanded political reforms and better pay in a peaceful protest in Oman on Friday.

Men and women gathered in Ruwi, a commercial district in the capital, Muscat, after prayers and chanted "we want democracy" while others shouted "more pay and jobs."

"Food prices and other commodities have gone up twice in price in the last three years... the increase is not enough," student Mohammed Hashil told Reuters.

Protesters demonstrated for about one hour and left the district. There were no reported arrests.