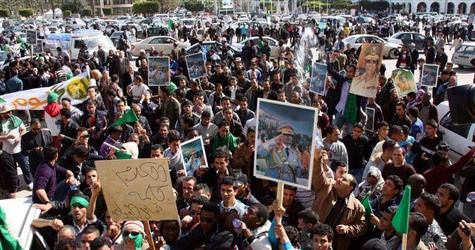 Violent unrest against Libya's Muammar Gaddafi spread to the capital Tripoli on Sunday and his son vowed to fight until the "last man standing" after scores of protesters were killed in the east of the country.

Gaddafi's son Saif al-Islam said in an address on state TV the army stood behind his father as a "leader of the battle in Tripoli" and would enforce security at any price. His comments were the first official reaction from the Libyan authorities since the unrest began.

As he spoke, police used tear gas to disperse thousands of protesters in Tripoli, where gunfire was heard, vehicles were on fire and protesters threw stones at billboards of Gaddafi, who is facing the most serious challenge to his four-decade rule.

Revolutions which deposed the presidents of Tunisia and Egypt have shaken the Arab world and inspired protests across the Middle East and North Africa, threatening the grip of long-entrenched autocratic leaders.

In the Gulf kingdom of Bahrain, thousands of protesters gathered in a square in Manama, calling for political change and awaiting promised talks with the island's Sunni rulers.

After days of violence, the mood among the mainly Shi'ite protesters appeared to be more conciliatory.

Libya, however was witnessing the bloodiest episodes yet in two months of unrest convulsing the Arab world.

A resident in Tripoli told Reuters by telephone he could hear gunshots. "We're inside the house and the lights are out. There are gunshots in the street," he said. "That's what I hear, gunshots and people. I can't go outside."

An expatriate worker said: "Some anti-government demonstrators are gathering in the residential complexes. The police are dispersing them. I can also see burning cars."

The violence spread to Tripoli after days of protests in Benghazi, Libya's second largest city, in which at least 233 people have been killed, according to Human Rights Watch.

Communications are tightly controlled and Benghazi is not accessible to international journalists, but the picture that has emerged is of a city slipping from the grasp of security forces in the biggest challenge to Gaddafi's rule since the "brotherly leader" seized power in a 1969 military coup.

Habib al-Obaidi, head of the intensive care unit at the main Al-Jalae hospital in Benghazi, said the bodies of 50 people, mostly killed by gunshots, had been brought there on Sunday afternoon. The deaths came after scores were killed on Saturday.

Two hundred people had arrived wounded, 100 of them in serious condition, he said.

Members of an army unit known as the "Thunderbolt" squad had come to the hospital carrying wounded comrades, he said. The soldiers said they had defected to the cause of the hundreds of thousands of protesters in the streets and had fought and defeated Gaddafi's elite guards.

"They are now saying that they have overpowered the Praetorian Guard and that they have joined the people's revolt," another man at the hospital who heard the soldiers, lawyer Mohamed al-Mana, told Reuters by telephone.

A Libyan tribal leader threatened to block oil exports to the West within 24 hours if the government does not stop the "oppression of protesters." Another tribal chief told al Jazeera Gaddafi had to leave the country.

Saif al-Islam, who has in the past pushed a reform agenda in Libya with only limited success, said the protests threatened to sink Libya into civil war and split the country.

He said reports of hundreds killed were an exaggeration, but acknowledged the police and army made mistakes in dealing with the protests.

The General People's Congress, Libya's equivalent of a parliament, would convene on Monday to discuss a "clear" reform agenda, while the government would also raise wages, in an apparent attempt to address some of the protesters' demands, he said.

The clamour for reform across a region of huge strategic importance to the West and the source of much of its oil began in Tunisia in December. The overthrow of President Zine al-Abidine Ben Ali then inspired Egyptians to rise up against strongman Hosni Mubarak, overthrowing him on February 11.

The tide has challenged Arab leaders, including many who have long been backed by the West as vital energy suppliers and enemies of Islamist militants. While each uprising has its own dynamics, from religion to tribalism, all protesters seem united by frustration over economic hardship and a lack of political freedom under entrenched elites.

In Iran, thousands of security personnel deployed in the streets of Tehran and other cities to prevent protesters rallying in spite of a ban, opposition websites said.

The United States said it was "gravely concerned" by the situation in Libya and warned its citizens to delay trips there.

In Bahrain, the main opposition party said it wanted the crown prince to show signs of addressing opposition demands before any formal dialogue could start.

"All political parties in the country deserve a voice at the table," he told CNN. "I think there is a lot of anger, a lot of sadness...We are terribly sorry and this is a terrible tragedy for our nation," said the prince, who is seen as a reformist.

Ibrahim Mattar, a lawmaker of the main opposition Wefaq party, said protesters, thousands of whom were camping out in Pearl square, wanted more than words.

"We are waiting for an initiative from him, with a scope for dialogue," he said, adding that the prince should "send a small signal he is willing to have a constitutional monarchy."

Shi'ites, who make up 70 percent of the population, complain of unfair treatment in Bahrain, an ally of the United States, whose Fifth Fleet is based there.

The opposition is demanding a constitutional monarchy that gives citizens a greater role in a directly elected government. It also wants the release of political prisoners.

Speculation was growing that Prime Minister Sheikh Khalifa bin Salman al-Khalifa, in office since independence from Britain in 1971, would be replaced by the crown prince.

In Tunisia on Sunday, security forces fired into the air as tens of thousands of demonstrators gathered downtown to call for the replacement of the interim government -- a sign that problems are not all swept away with the removal of a dictator.

In Yemen, shots were fired at a demonstration in the capital Sanaa on the ninth consecutive day of unrest. Thousands were demanding the departure of President Ali Abdullah Saleh, who called for dialogue with the opposition.

But the coalition of main opposition parties said there could be no dialogue with "bullets and sticks and thuggery," or with a government "which gathers mercenaries to occupy public squares ... and terrorise people."

At least 2,000 protesters gathered in a square in Morocco's capital on Sunday to demand King Mohammed give up some powers.