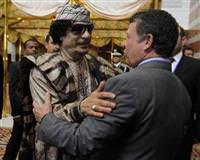 Libyan leader Muammar Gaddafi vowed defiance in the face of a mounting revolt against his 41-year rule on Tuesday, making a fleeting television appearance to scorn protesters and deny he had fled the country.

Gaddafi's forces have cracked down fiercely on demonstrators, with fighting now spreading to the capital Tripoli after erupting in Libya's oil-producing east last week. Human Rights Watch says at least 233 people have been killed.

As the fighting has intensified across the thinly populated nation stretching from the Mediterranean deep into the Sahara desert, cracks appeared among Gaddafi supporters, with some ambassadors resigning and calling for his removal.

The justice minister quit in protest at the use of force and a group of army officers called on soldiers to "join the people," while two pilots flew their warplanes to nearby Malta.

Tripoli, a Mediterranean coastal city, appeared calm in the early hours of Tuesday. One resident said: "There is heavy rain at the moment, so people are at home. I am in the east of the city and have not heard clashes."

Gaddafi appeared on television after days of seclusion to scoff at reports he had fled to Venezuela, ruled by his friend President Hugo Chavez.

"I want to show that I'm in Tripoli and not in Venezuela. Do not believe the channels belonging to stray dogs," Gaddafi said, holding an umbrella and leaning out of a van apparently outside his residence in what amounted to a 22-second appearance.

"I wanted to say something to the youths at Green Square (in Tripoli) and stay up late with them but it started raining. Thank God, it's a good thing," added Gaddafi, who has ruled Libya with a mixture of populism and tight control since taking power in a military coup in 1969.

World powers have condemned the use of force against protesters, with U.N. Secretary General Ban Ki-moon accusing Libya of firing on civilians from warplanes and helicopters.

"This must stop immediately," said Ban, adding he had spoken to Gaddafi and urged him to halt attacks on protesters. The Security Council was to hold a meeting on Libya at 9 a.m. EST (1400 GMT), diplomats said.

"The fall of Gaddafi is the imperative of the people in streets," said Ali al-Essawi, Libya's ambassador to India after resigning his post. He told Reuters that African mercenaries had been recruited to help put down protests.

Demonstrations have spread to Tripoli after several cities in the east -- including the second city Benghazi, where the protests had first erupted -- appeared to fall to the opposition, according to residents.

Residents on Monday reported gunfire in parts of Tripoli and one political activist said warplanes had bombed the city. Residents said anxious shoppers were queuing outside stores to try to stock up on food and drink. Some shops were closed.

Libyan guards have withdrawn from their side of the border with Egypt and "people's committees" were now in control of the crossing, the Egyptian army said.

Egypt's military rulers -- who took power following the overthrow of President Hosni Mubarak on February11 -- reinforced the frontier but kept the main crossing open round-the-clock to allow the sick and wounded to enter, a military source said.

Shell said it was pulling out its expatriate staff from Libya temporarily because of the unrest.

The upheavals which deposed the presidents of Tunisia and Egypt have shaken the Arab world and inspired protests across the Middle East and North Africa, threatening the grip of long-entrenched autocratic leaders.

While Human Rights Watch said at least 233 people had been killed in five days of violence in Libya, opposition groups put the figure much higher. No independent verification was available and communications from outside were difficult.

U.S. Secretary of State Hillary Clinton said it was "time to stop this unacceptable bloodshed" and EU foreign ministers also condemned the killing of protesters.

A flamboyant figure with his flowing robes and bevy of female bodyguards, Gaddafi has long been accused by the West of links to terrorism and revolutionary movements.

U.S. President Ronald Reagan once called him a "mad dog" and sent planes to bomb Libya in 1986 and he was particularly reviled after the 1988 Pan Am airliner bombing over Lockerbie, Scotland, by Libyan agents in which 270 people were killed.

But this changed when Libya gave up its weapons of mass destruction in order to secure an end its international isolation and a rapprochement with western governments keen to tap its oil wealth and other lucrative trade and investment deals.