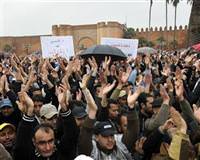 Thousands of protesters took to the streets in Morocco on Sunday demanding King Mohammed give up some of his powers, dismiss the government and clamp down on corruption.

In the capital Rabat, some people in the crowd waved Tunisian and Egyptian flags in recognition of the popular uprisings that overthrew the two countries' presidents. At least 5,000 people marched across central Rabat, according to Reuters reporters.

Uniformed police kept their distance from the protest but plain-clothes officers with notebooks mingled with the crowd amid chants of "The people reject a constitution made for slaves!" and "Down with autocracy!"

Some called on the fragile coalition government of Prime Minister Abbas El Fassi to leave. Placards and slogans made no direct attacks on the king although one criticized the influence of firms in which his family is the biggest investor.

Morocco is a Western ally with a reformist monarch and growing economy, seen by some experts as less susceptible than its neighbors to the unrest sweeping through the Arab world.

"This is a peaceful protest to push for constitutional reform, restore dignity and end graft and the plundering of public funds," said Mustapha Muchtati of the group Baraka -- "enough" in Moroccan Arabic -- which helped organize the march.

After the protests, there was some vandalism, which demonstrators blamed on "looters" unconnected to their cause.

"We were coming back from along the coast and we saw mostly young people attacking restaurants, night clubs and bars with stones. They blocked access to the city's port and they torched the Macdonalds restaurant on the seafront," said a protester in Tangiers who gave his name as Amin.

The official MAP news agency cited "isolated incidents" by trouble makers in Marrakesh, Larache, Tetouan and Al Hoceima with damage to public and private buildings, caused by fires and stones that had been thrown.

The protest was initiated by a group calling itself the February 20 Movement for Change, which has attracted 20,000 followers on the social networking website Facebook.

They were joined by youths of the banned Islamist Justice and Charity opposition group, members of opposition parties and Berber militants. The main press union and human rights groups also voiced support for the protest.

Mohamed Al-Aouni, of the February 20 Movement for Change organizing committee, said younger protesters want to stage daily sit-ins. "We have not yet agreed on the next step. Some suggest weekly protests," he said.

City buses were taken out of service, preventing some people from taking part. "We wanted to spare buses potential damage," a government official said.

DEMOS IN OTHER CITIES

Aouni said the smaller protest in Marrakesh had been "violently dispersed by police using long truncheons. The protesters gave up to avoid escalation," he said. Officials could not be immediately reached for comment.

The government official said a protest in Casablanca drew only a few hundred people, while Aouni put the figure at about 10,000. Independent estimates were not immediately available.

Finance Minister Salaheddine Mezouar had urged citizens to boycott the march, warning that any "slip may in the space of a few weeks cost us what we have achieved over the last 10 years."

Morocco is officially a constitutional monarchy with an elected parliament. But the constitution empowers the king to dissolve the legislature, impose a state of emergency and have a key say in government appointments including the prime minister.

"Demands for constitutional reform have been around for decades," political commentator Ali Anozla said. "But this is the first time this demand has been embraced by apolitical youths, Moroccans from leftists to Islamists and Berber militants. A barrier of fear has been overcome today."

Officials say Morocco's commitment to reform has never been stronger than under King Mohammed. As a member of the Alaouite dynasty that has ruled Morocco for some 350 years and claims descent from Prophet Mohammad, the king is considered sacred by the constitution.

Since he was enthroned in 1999, his governments have tried to repair the bleak legacy of human rights abuses, poverty and illiteracy left by the 38-year rule of his father King Hassan.