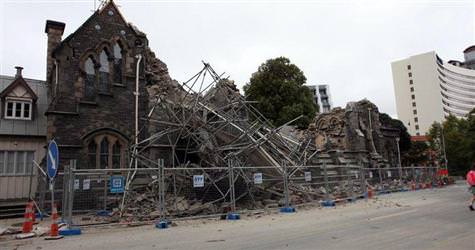 It was the second quake to hit the city in five months, and New Zealand's most deadly natural disaster for 80 years.

"We may well be witnessing New Zealand's darkest day...The death toll I have at the moment is 65 and that may rise," New Zealand Prime Minister John Key told local TV.

"It's hard to describe. What was a vibrant city a few hours ago has been brought to its knees," added Key, who had flown to Christchurch.

The 6.3 magnitude quake struck at lunchtime, when the streets and shops thronged with people and offices were still occupied.

Christchurch's mayor described the city of almost 400,000 people as a war zone.

The quake is country's worst natural disaster since a 1931 quake in the North Island city of Napier which killed 256.

"We've had a lot of people at the emergency department...a significant number, a lot of major injuries," said David Meates, the chief executive of the Canterbury Health Board.

"They are largely crushes and cuts types of injuries and chest pain as well," he said, adding some of the more seriously injured could be evacuated to other cities, where hospitals have been put on alert and prepared to accept casualties.

All army medical staff have been mobilized, while several hundred troops were helping with the rescue, officials said.

A woman trapped in one of the buildings said she was terrified and waiting for rescuers to reach her six hours after the quake.

"I thought the best place was under the desk but the ceiling collapsed on top, I can't move and I'm just terrified," office worker Anne Voss told TV3 news.

Emergency shelters had also been set up in local schools and at a race course, as night approached.

Helicopters dumped giant buckets of water to try to douse a fire in one tall office building. A crane helped rescue workers trapped in another office block.

"I was in the square right outside the cathedral -- the whole front has fallen down and there were people running from there. There were people inside as well," said John Gurr, a camera technician who was in the city center when the quake hit.

Authorities ordered major hospitals up and down the country to make room for quake victims. There were reports of a shortage of ambulances.

"A lady grabbed hold of me to stop falling over...We just got blown apart. Colombo Street, the main street, is just a mess...There's lots of water everywhere, pouring out of the ground," Gurr said.

Emergency crews picked through the rubble, including a multi-storey office building whose floors appeared to have pancaked on top of each other.

Christchurch is built on silt, sand and gravel, with a water table beneath. In an earthquake, the water rises, mixing with the sand and turning the ground into a swamp and swallowing up sections of road and entire cars.

TV footage showed sections of road that had collapsed into a milky, sand-colored lake right beneath the surface. One witness described the footpaths as like "walking on sand."

Unlike last year's even stronger tremor, which struck early in the morning when streets were virtually empty, people were walking or driving along streets when the shallow tremor struck, sending awnings and the entire faces of buildings crashing down.

Police said debris had rained down on two buses, crushing them, but there was no word whether anyone had been killed or injured.

The power company Orion said it expected that as much as half of Christchurch area would be without power overnight.

The quake helped knock the New Zealand dollar down to $0.75, about 1.8 percent off late U.S. levels, on fears the damage could dent confidence in the already fragile economy.

Westpac Bank also raised the possibility that the central bank could cut interest rates over the next few weeks to shore up confidence after the quake, while other banks pushed out their expectations for the next rate hike. ANZ now expects the central bank to be on hold until the first quarter of 2012.

Shares in Australian banks and insurers, which typically have large operations in New Zealand, fell after the quake. But credit rating agency Fitch said the tremor would not itself trigger a downgrade of New Zealand sovereign rating.

The tremor was centered about 10 km (six miles) southwest of Christchurch, which had suffered widespread damage during last September's 7.1 magnitude quake but no deaths.

James Goff, of the University of New South Wales' Natural Hazards Research Laboratory in Australia, said some buildings that survived last year's quake had been weakened and unable to withstand the second one, especially such a shallow tremor.

"A lot of the infrastructure has still not fully recovered from the last earthquake so that would have still been feeling weak and susceptible to another big earthquake," he said.

The region has been struck by thousands of aftershocks since the original quake.

New Zealand, which sits between the Pacific and Indo-Australian tectonic plates, records on average more than 14,000 earthquakes a year, of which about 20 would normally top magnitude 5.0.