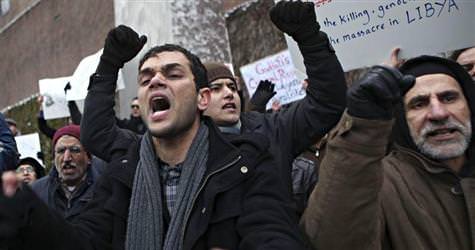 Looters have attacked Turkish companies in Libya where they have projects worth more than $15 billion, Turkey's foreign trade minister said on Monday, as hundreds of Turks were evacuated from the country.

Violent unrest against Libya's Muammar Gaddafi has spread to the capital Tripoli and his son has vowed to fight until the "last man standing" after scores of protesters were killed in the east of the country.

"At the raided building sites there have only been attacks on property. Nothing has been done to Turkish citizens," State Minister Zafer Caglayan said at a meeting with foreign ministry and business officials to discuss the situation in Libya.

He said companies would be compensated for their damage.

"Our foremost expectation and demand is that the safety of our citizens will be ensured. Libyan officials have been warned at every level," he added.

A total 581 Turkish citizens were evacuated over the weekend from Benghazi in the east of the country, where many Turkish firms were active. Two planes on Saturday brought 293 Turks from Benghazi and another 288 came on Sunday.

According to Turkish television reports, another four planes and two ships were being sent to Libya on Monday and that Turks could possibly be evacuated via Egypt.

However, media reports on Monday said one Turkish Airlines plane had been unable to land amid claims that opposition protesters had taken control of the airport in Benghazi. Those reports could not be confirmed.

Trade volume between the two countries amounted to around $2.4 billion last year.

"People are not safe in Libya. Opponents and supporters of the government are clashing in the street," Bilge Durukan, a construction company project manager, was quoted as saying by Turkey's state-run Anatolian news agency on his arrival at Istanbul airport.

Passenger Dilek Angin said workers in Libya had taken construction machinery, vehicles and electronic goods from their worksites in the belief that they would not be paid.