Turks wait at Benghazi port for ships out of Libya 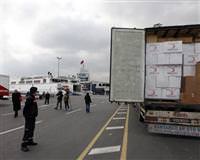 Thousands of Turkish workers stranded in the eastern Libyan city of Benghazi began boarding buses for the port on Tuesday to wait for ships sent to rescue them from violence engulfing the North African country.

Libyan leader Muammar Gaddafi has vowed defiance in the face of mounting revolt, making a fleeting television appearance to scorn protesters and deny he had fled the country.

Prime Minister Tayyip Erdogan said he had spoken to Gaddafi twice in an effort to secure safe passage out for Turkish citizens. Officials say there are a total 25,000 Turks in Libya, many of them working for construction firms.

The Turkish workers in Benghazi, thousands of whom took refuge overnight in a soccer stadium overnight, were being taken to a nearby port where the first two of five ships being sent from Turkey were expected to arrive on Tuesday evening.

Some of those kept in the stadium fell ill overnight, but were given blankets and bread and were not treated badly, said Burcu Begde, employee of a construction firm building a university in Benghazi, who has just returned to Turkey.

"Our colleagues are on the bus heading to the port," she told Reuters after speaking with her colleagues in Benghazi on Tuesday.

Her colleagues reported hearing firefights and explosions during their stay in the stadium, with youths striding around with Kalashnikov rifles.

Two ferries set sail on Monday from Istanbul and were expected to reach Benghazi on Tuesday afternoon to begin the evacuations.

"We hope these ships will arrive this afternoon and will evacuate 3,000 people in the first stage," Foreign Minister Ahmet Davutoglu told a news conference in Ankara. He said there were nearly 5,000 Turks in the Benghazi area.

Turkey's navy has also sent a transport ship capable of carrying 1,500 passengers from the eastern Mediterranean port of Mersin, escorted by two frigates and a refuelling ship and stocked with food for 6,000 people, the prime minister's office said.

Some Turks managed to catch a flight home from Benghazi on Sunday night, before violence spread to the airport.

Egypt's Foreign Minister Ahmed Aboul Gheit said on Tuesday that the airports runways had been destroyed, and passenger planes could no longer land there.

State-run Anatolian news agency said another ship was being sent to Libya on Tuesday afternoon and a fifth vessel was being prepared for departure on Wednesday. Each of these ships can carry 800 passengers.

A convoy of buses was also taking more people out by road to Egypt.

Three flights were scheduled to arrive in Istanbul from the Libyan capital Tripoli on Tuesday. Davutoglu said it had become impossible to land at Benghazi airport, which was out of action.

Around 1,000 Turks have so far been evacuated by plane.

Libya was part of the Ottoman Empire from the 16th century until it was conquered by Italy in 1912.