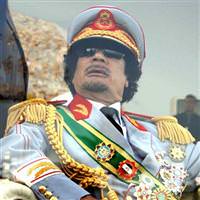 A defiant Muammar Gaddafi said he was ready to die "a martyr" in Libya, vowing to crush a growing revolt which has seen eastern regions break free of his 41-year rule and brought deadly unrest to the capital.

Swathed in brown robes, Gaddafi seethed and banged a podium on Tuesday outside one of his residences that was damaged in a 1986 U.S. air strike aiming to kill him. Next to him stood a monument of a fist crushing a U.S. fighter jet.

"I am not going to leave this land. I will die here as a martyr," Gaddafi said on state television, refusing to bow to calls from some of his own ministers, soldiers and protesters who braved a fierce crackdown to clamour for him to go.

Protests in Libya's neighbours Egypt and Tunisia toppled entrenched leaders, but Gaddafi said he would not be forced out by the rebellion sweeping through his oil-producing nation of 7 million stretching from the Mediterranean into the Sahara.

"I shall remain here defiant," said Gaddafi, who has ruled the mainly desert country with a mixture of populism and tight control since taking power in a military coup in 1969.

In New York, the U.N. Security Council condemned the use of violence and called for those responsible for attacks on civilians to be held to account.

The turmoil in Libya, which pumps nearly 2 percent of world oil output, sent Brent crude prices LCOc1 above $108 a barrel to a 2 ½ year high and triggered Wall Street's worst day since August as investors dumped stocks.

The White House said global powers must speak with one voice in response to the "appalling violence" in Libya. Secretary of State Hillary Clinton said Washington would take "appropriate steps" in time.

But Washington has little leverage over Libya, a U.S. adversary for most of Gaddafi's rule until it agreed in 2003 to abandon a weapons-of-mass-destruction programme and moved to settle claims from the 1988 Lockerbie bombing.
Gaddafi was unrepentant. Protesters were "rats and mercenaries" who deserved the death penalty, he said in the rambling, 75-minute speech. Gaddafi said he would call on people to "cleanse Libya house by house" unless protesters surrendered.

He urged supporters to take to the streets. "All of you who love Muammar Gaddafi, go out on the streets, secure the streets, don't be afraid of them ... Chase them, arrest them, hand them over," he said.

Libya's official news agency quoted him as telling Italian Prime Minister Silvio Berlusconi that "Libya is fine, its people are ... holding on to its security".

But British Foreign Secretary William Hague said there were "many indications of the structure of the state collapsing in Libya". Britain and other European nations have said they are trying to evacuate nationals from Libya by plane.[ID:nLDE71K2CF]

In a sign of his growing isolation, Libyan diplomats at the U.N. and several countries broke ranks and urged foreign nations to help stop the violence. [ID:N22284674]

Peru, which does not have a Libyan embassy but does have an ambassador in Tripoli, suspended diplomatic relations with Libya "for as long as violence against the population continues".

Some ministers and ambassadors have abandoned Gaddafi.

Several hundred people held a pro-Gaddafi rally in Tripoli's central Green Square on Tuesday, a Reuters reporter said. "Our leader!" and "We follow your path!", they chanted.

"There are several hundred supporters making their way into the city centre. They are in cars, making lots of noise and carrying his portrait," said a resident of the Mediterranean coastal city of 2 million, which is key to controlling Libya.

A government spokesman accused international media of exaggerating the gravity of the situation in the country.

But swathes of Libya are no longer under government control.

In Sabratah, 50 miles (80 km) west of the capital, the Libyan army had deployed a "large number" of soldiers after protesters destroyed almost all the security services offices, the online Quryna newspaper said.