Six Turks arrested in Libya have been released 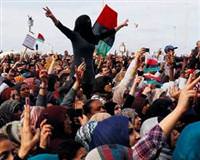 The Ministry of Foreign Affairs has announced that they have successfully secured the release of six Turkish nationals being held in the Judeyda Prison.

The six Turkish citizens were employed at the Ain Zara site and had been arrested during the turmoil in Tripoli.
The announcement, which was made by the Foreign Affairs Ministry Libya Crisis Center, states that a travel document has been prepared by the Embassy in Trablus and will be transferred by the consulate to the airport to them be flown back to Turkey.