Turkey against imposing sanctions on Libya 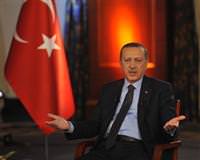 Turkey's Prime Minister Tayyip Erdogan said Turkey was against imposing sanctions on Libya because such measures would punish the Libyan people.

"It is not correct to move hastily on these type of situations. It is not right to impose sanctions against Libya because such measures will punish the population," Erdogan stated in an interview in Ankara late on Wednesday.

Turkey said the safety of its nationals in Libya was its first priority. There were around 25,000 Turkish citizens in Libya before the violence broke out and Turkey is mounting the biggest evacuation operation in its history.

Erdogan has warned Muammar Gaddafi's government against taking "cruel steps" to crush the uprising, but the opposition has criticised Erdogan for not speaking out more forcefully against the Libyan government.

Erdogan received a human rights award from Gaddafi last year, and critics have said the premier should give it back.

The government has accused the opposition of jeopardising the lives of Turkish workers stranded in Libya and of using the Libyan crisis to undermine the government ahead of a general election in June, that Erdogan's AK Party is expected to win.