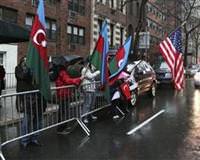 World powers struggled to find a way to stop Libyan leader Muammer Gaddafi lashing out at his people as he clings to power in Tripoli, the last big city where an uprising against his rule has yet to take hold.

President Barack Obama signed an order prohibiting transactions related to Libya and blocking property, the first major step to isolate the North African leader, who has used army, police and irregular forces to try to crush the protests.

"By any measure, Muammar Gaddafi's government has violated international norms and common decency and must be held accountable," Obama said in a statement on Friday.

Diplomats at the United Nations said a vote on a draft resolution calling for an arms embargo on Libya as well as travel bans and asset freezes on its leaders might come on Saturday after U.N. chief Ban ki Moon said it could not wait.

Western powers, with whom Gaddafi has exploited Libya's oil after years of diplomatic isolation, have struggled to keep up with the pace of protests that have swept away Western-backed strongmen in neighboring Egypt and Tunisia already this year.

Tripoli's streets were eerily quiet overnight, with portraits of Gaddafi adorning street corners and a few police cars patrolling after a day in which residents said pro-Gaddafi forces fired at and over the heads of protesters in many areas. Up to 25 people were said to have been killed in one area alone.

"Peace is coming back to our country," one of Gaddafi's sons, Saif al-Islam Gaddafi, told reporters flown into Libya under close supervision.

"If you hear fireworks don't mistake it for shooting," the 38-year-old London-educated younger Gaddafi said, smiling.

He acknowledged pro-Gaddafi forces had "a problem" with Misrata, Libya's third largest city, and Zawiya, also in the west, where protesters had beaten back counter-attacks by the military but said the army was prepared to negotiate.

"Hopefully there will be no more bloodshed. By tomorrow we will solve this," he said on Friday evening.

The country's second city Benghazi fell to the opposition along with much of eastern Libya earlier in the uprising, which began more than a week ago. Gaddafi vowed to "crush any enemy" on Friday, addressing a crowd of supporters in Tripoli's central Green Square. Residents said government forces had fired when protesters, who had gathered after Friday prayers around the capital, approached.

"They just started shooting people," Ali, a businessman who declined to give his full name, said by telephone. A female resident said her friend had seen police fire at people in another district and had told her 25 people were killed there.

At Tripoli's international airport, thousands of desperate migrant workers besieged the main gate trying to leave the country as police used batons and whips to keep them out.

International diplomats say some 2,000 or more people have been killed. The U.N. Security Council draft, drawn up by Britain and France, said the attacks on civilians in Libya may amount to crimes against humanity.

The White House did not express direct support for the proposal but said it was discussing it with members of the Security Council, including the other four permanent members -- China, Russia, Britain and France.

Charles Ries, director of the Center for Middle East Public Policy at Rand Corporation, said the U.N. resolution was risky.

"The U.N. Security Council is a very risky proposition if, for example, the Chinese were not in favor of voting a resolution, and I don't think the administration feels confident that it has all of those ducks lined up," Ries said.

Washington, which in recent years had a rapprochement with Gaddafi and has several energy companies in Libya still working while other foreign firms have curtailed or suspended operations, announced unilateral sanctions first.

"His legitimacy has been reduced to zero in the eyes of his people," said Obama's spokesman, who also refused to rule out military action.

Gaddafi's own people seemed close to forcing him from power, although it is hard to assess the relative strengths of forces that include irregular units, tribal loyalists and militias backing Gaddafi and regular army units who have now gone over to the opposition.

Other towns were reported by residents to have fallen to the opposition, although Gaddafi retained the defiance he has often displayed against the West over more than four decades.

"We can crush any enemy. We can crush it with the people's will," he urged the crowd of thousands, threatening to open military arsenals to his supporters and tribesmen.

Residents said parts of Tripoli, apparently the last major stronghold of the man who took over Libya as a young colonel in a 1969 military coup, were already beyond his control.

Washington, having evacuated Americans from Libya after days of difficulties, said it was closing down its embassy. Gaddafi, once branded a "mad dog" by the White House for backing global militants, had in recent years sought cooperation with the West.

Protesters in Zawiyah, an oil refining town on the main coastal highway 50 km (30 miles) west of Tripoli, fought off government forces on several nights, according to witnesses who fled across the Tunisian border at Ras Jdir.

"There are corpses everywhere ... It's a war in the true sense of the word," said Akila Jmaa, who crossed into Tunisia on Friday after traveling from the town.

State television said the government was raising wages and food subsidies and ordering special allowances for all families, a late bid to enrol the support of Libya's 6 million citizens.

In the east, ad hoc committees of lawyers, doctors, tribal elders and soldiers appeared to be filling the vacuum left by Gaddafi's government with some success.

There was little sign of the radical Islamists whom Gaddafi has accused of fomenting the unrest.

Army and police in the eastern city of Adjabiya told Al Jazeera they had joined the opposition and a man back from the Western Mountains, some 150 km (90 miles) southwest of Tripoli, said three towns there had shrugged off central control.

Libya supplies 2 percent of the world's oil, the bulk of it from wells and supply terminals in the east. The opposition says it controls nearly all oilfields east of Ras Lanuf.

Industry sources told Reuters that crude oil shipments from Libya, the world's 12th-largest exporter, had all but stopped because of reduced production, a lack of staff at ports and security concerns.

Benchmark Brent oil futures were steady at around $112, after a Saudi assurance that it would replace any shortfall in Libyan output brought prices back from Thursday's peak of nearly $120.