Turks make their mark on the CeBIT trade fair 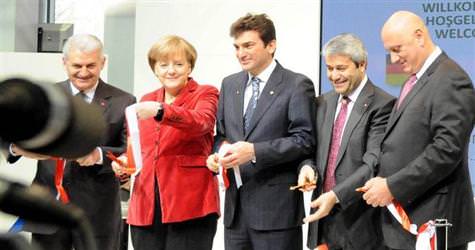 A Turkish breeze is blowing in the world’s largest Information Technology and telecommunications fair CeBIT, which is being held from March 1st to 5th in Germany.

The Cebit 2011 Trade Fair, held in Hannover, brings together 4,200 firms from over 70 different countries to promote their products and services to technology buffs. Filling an entire auditorium in the fair, 92 Turkish companies are now displaying their new products and services in an international scope.

This year Turkey is acting as joint partners to the world's largest informatics fair. Although Prime Minister Recep Tayyip Erdoğan was scheduled to conduct the opening alongside his German counterpart Angela Merkel yesterday, Erdoğan had to back out, choosing instead to attend the funeral of Felicity Party leader Necmettin Erbakan. Merkel went ahead with the opening as scheduled and was present at the opening of Turkey's stand. Merkel was joined by Minister of Transportation Binali Yıldırım and Minister of Energy Nihat Ergün for the opening.

A KISS FOR SELOCAN
Paying a visit to the Turkcell stand, German Prime Minister Angele Merkel was presented with the gift of a gold SIM card by Turkcell General Manager Süreyya Ciliv as a gesture for Turkcell Europe, which will begin operations in Germany in May. Merkel said to Ciliv, "So, you are coming as a competitor to Germany," to which Ciliv responded, "No, we are not coming as rivals, we are coming to collaborate."Merkel's announcement that she chooses to use Turkcell when she comes to Turkey was noteworthy as was her giving Turkcell's mascot Selocan a hand shake and kiss on the cheek. Merkel also praised Turkey's support for CeBIT 2011.