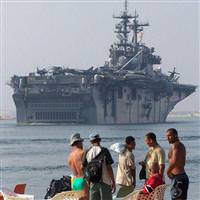 The United States is moving ships and planes closer to Libya, drawing on a network of bases in Europe and the Middle East, as Western governments prepare for possible military and humanitarian action.

Here are details about the military resources Washington can call on in the region:

-- Two naval bases, at Makri and Soudha Bay, and one air base at Iraklion.

-- Also headquarters for the Sixth Fleet.

-- Operations centered around outfitting troops in Iraq and Afghanistan.

-- Around 1,270 Army, Navy and Air Force personnel. One airbase at Moron and one naval base at Rota, which provides support for U.S. and NATO ships.

-- One airbase at Incirlik and support facilities at Ankara and Izmir.

-- U.S. Strategic Command also has one Spacetrack Radar at Incirlik.

-- Sixth Fleet's area of operation, which includes the Mediterranean Sea and parts of the Atlantic Ocean, usually is patrolled by frigates and destroyers. It has two aircraft carriers further southeast in the Red Sea and the Arabian Sea.

-- The fleet is headquartered at Gaeta, Italy.

-- Its command ship, the USS Mt Whitney, is the only vessel permanently assigned to the Sixth Fleet area. It can carry a crew of over 300 and transport supplies to support an emergency evacuation of 3,000 people.

-- As of Tuesday, there were three U.S. ships -- two destroyers and the Mt Whitney -- in the Mediterranean.

-- The commander of the Fifth Fleet is responsible for an area of about 2.5 million sq miles (6.5 million sq km) of water area, including the Gulf, Red Sea, Gulf of Oman and parts of the Indian Ocean.

-- The Fifth Fleet includes aircraft carriers, destroyers and other ships that deploy on rotation from the United States, plus a few smaller ships based in the Gulf for longer periods.

-- The Fifth Fleet protects shipping lanes in the Gulf and nearby waters. It is the naval arm of Central Command, responsible for the wars in Afghanistan and Iraq, and its aircraft fly missions over both countries.

-- The Fifth Fleet has around 30,000 personnel across the region. About 4,500 U.S. military and civilian staff work at the port and base in Bahrain, at Juffairare just southeast of the capital Manama.

-- On Monday, the destroyer USS Barry moved through the Suez Canal and is now in the southwestern Mediterranean.

-- Two amphibious assault ships, the USS Kearsarge, which can carry 2,000 Marines, and the USS Ponce, are in the Red Sea heading to the Suez Canal.