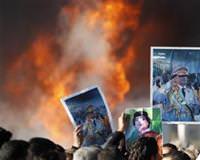 Two U.S. warships were passing through the Suez Canal on their way to waters off Libya on Wednesday as Western nations exerted diplomatic and military pressure on Muammar Gaddafi to step down.

The United States said Libya could sink into civil war unless the Libyan leader ends his four-decade rule amid fears that the uprising, the bloodiest yet against long-serving rulers in the Middle East, could cause a humanitarian crisis.

Gaddafi is defiant and his son, Saif al-Islam, has warned the West against launching military action. He said the veteran ruler would not relinquish power or be driven into exile.

Across Libya, tribal leaders, officials, military officers and army units have defected to the rebel cause and say they are becoming more organized. Tripoli is a stronghold for Gaddafi in this oil-producing north African state.

"We are going to keep the pressure on Gaddafi until he steps down and allows the people of Libya to express themselves freely and determine their own future," Susan Rice, the U.S. ambassador to the United Nations, told ABC's "Good Morning America."

Captain Faris Zwei, among officers in the east who joined the opposition to Gaddafi, said there were more than 10,000 volunteers in Ajdabiyah, 800 km (500 miles) from the capital.

"We are reorganizing the army, which was almost completely destroyed by Gaddafi and his gang before they left," he said. "We are reforming, as much as we can, the army from the youth that took part in the revolution."

Two amphibious assault ships, USS Kearsarge, which can carry 2,000 Marines, and USS Ponce, entered the canal on Wednesday en route to the Mediterranean. The destroyer USS Barry moved through the Suez Canal on Monday.

The ships entered through the southern end of the canal, an official said, adding that they were expected to pass through by 3:30 p.m. (1330 GMT) or 4:00 p.m. local time.

Arab League foreign ministers meet on Wednesday at an extraordinary session in Cairo and are expected to reinforce their condemnation of Gaddafi. Some delegates want the meeting to underline the League's unwillingness to see foreign intervention in Libya.

The repositioning of U.S. ships and aircraft closer to Libya is widely seen as a symbolic show of force since neither the United States nor its NATO allies have shown any appetite for direct military intervention in the turmoil that has seen Gaddafi lose control of large swaths of his country.

"We are looking at a lot of options and contingencies. No decisions have been made on any other actions," Defense Secretary Robert Gates said, noting the United Nations had not authorized the use of force in Libya.

Italy said it was sending a humanitarian mission to Tunisia to provide food and medical aid to as many as 10,000 people who had fled violence in Libya on its eastern border.

Tunisian border guards fired into the air on Tuesday to try to control a desperate crowd clamoring to cross the frontier.

Italy said it was sending a humanitarian mission to Tunisia to provide food and medical aid to as many as 10,000 people who had fled violence in Libya on its eastern border.

Tunisian border guards fired into the air on Tuesday to try to control a desperate crowd clamoring to cross the frontier.

U.S. RULES NOTHING OUT

Secretary of State Hillary Clinton said: "Libya could become a peaceful democracy or it could face protracted civil war."

The U.S. Senate, in a unanimous vote, approved a resolution "strongly condemning the gross and systematic violation of human rights in Libya, including violent attacks on protesters demanding democratic reforms."

The White House said the ships were being redeployed in preparation for possible humanitarian efforts but stressed it "was not taking any options off the table." Gates said: "Our job is to give the president the broadest possible decision space."

British Prime Minister David Cameron, who said Britain would work with allies on preparations for a no-fly zone over Libya, said it was unacceptable that "Colonel Gaddafi can be murdering his own people using airplanes and helicopter gunships."

General James Mattis, commander of U.S. Central Command, told a Senate hearing that imposing a no-fly zone would be a "challenging" operation. "You would have to remove air defense capability in order to establish a no-fly zone, so no illusions here," he said. "It would be a military operation."

Analysts said Western leaders were in no mood to rush into conflict after drawn-out involvements in Afghanistan and Iraq.

Gaddafi, a survivor of past coup attempts, has told television networks: "All my people love me," dismissing the significance of the rebellion that has ended his control over much of oil-rich eastern Libya.

The Libyan leader has, however, faced defections from soldiers, diplomats and ministers. Gaddafi replaced two of his ministers who had defected to support the uprising seeking to oust him, Libyan state television said on Wednesday.

Despite the widespread collapse of Gaddafi's rule, his forces were also fighting back in the west. A reporter on the Tunisian border saw Libyan troops reassert control at a crossing abandoned on Monday, and residents of Nalut, about 60 km (35 miles) from the border, said they feared pro-Gaddafi forces were planning to recapture the town.

The U.N. General Assembly on Tuesday unanimously suspended Libya's membership of the U.N. Human Rights Council. A U.N. Security Council resolution on Saturday called for a freeze on Gaddafi's assets and a travel ban and refers his crackdown to the International Criminal Court.

The United States has frozen $30 billion in Libyan assets.

Libya's National Oil Corp said output had halved due to the departure of foreign workers. Brent crude surged above $116 a barrel on Tuesday as supply disruptions and potential for more unrest in the Middle East and North Africa kept investors edgy.