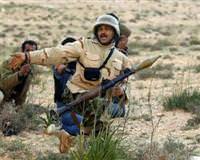 Muammar Gaddafi launched a land and air offensive to retake territory in Libya's east at dawn on Wednesday, sparking a rebel call for foreign air strikes on African mercenaries they said were helping him stay in power.

The veteran ruler twinned the attack with a fiery propaganda broadside against the rebels, playing on both nationalist opinion and Western jitters by saying much blood would be shed in "another Vietnam" if foreign powers intervened in the crisis.

"We will enter a bloody war and thousands and thousands of Libyans will die if the United States enters or NATO enters," Gaddafi told Tripoli supporters at a gathering televised live.

"We are ready to hand out weapons to a million, or 2 million or 3 million, and another Vietnam will begin. It doesn't matter to us. We no longer care about anything."

On the battlefield, government troops briefly captured Brega, an oil export terminal, before being driven back by rebels who have held the town 800 km (500 miles) east of Tripoli for about a week, rebel officers said, adding they were ready to move westwards against Gaddafi's forces if he refused to quit.

Further bombing raids near the oil terminals were carried out in the afternoon. Estimates of the death toll during the day ranged between five and 14.

There has been talk among the international community of the possibility of imposing a no-fly zone over Libya, but on Wednesday U.S. Defense Secretary Robert Gates said such a move would first require an attack to cripple Libyan air defenses.

"One of our biggest concerns is Libya descending into chaos and becoming a giant Somalia," Secretary of State Hillary Clinton told U.S. lawmakers.

Gaddafi, who once said ballot box democracy was for donkeys, told the gathering in Tripoli the world did not understand he had given power to the people long ago.

"We put our fingers in the eyes of those who doubt that Libya is ruled by anyone other than its people," he said, referring to his system of "direct democracy" launched at a meeting attended by visiting Cuban leader Fidel Castro in 1977.

Referring to an unprecedented two-week-old popular uprising against his rule, Gaddafi also called for the United Nations and NATO to probe what had happened in Libya, and said he saw a conspiracy to colonize Libya and seize its oil.

"SHOOT THEIR OWN PEOPLE"

A Tripoli resident and Gaddafi opponent, who did not want to be identified, told Reuters afterwards: "Gaddafi will hang on for a while. It's not going to be easy for an unarmed crowd to face highly armed forces eager to shoot their own people."

The assault on Brega appeared to be the most significant military operation by Gaddafi since the uprising erupted in mid-February and set off a confrontation that Washington says could descend into a long civil war unless Gaddafi steps down.

Witnesses said the attack was backed by heavy weapons and air strikes. One of the witnesses said Gaddafi's forces were 2-3 km from the city center and had 300-350 rebels pinned down at an oil industry airport on the city outskirts.

Hisham Mohammed, a 33-year-old mechanic on the side of the rebels, was defiant.

"I'm going to Brega to help our brothers there. I'm washed, I've prayed, and I'm ready to go to God," he told Reuters.

Analysts cautioned against drawing firm conclusions from fast moving events in a situation of erratic communications.

"The attack reinforces the idea that the government is capable of projecting power far into the east," said Shashank Joshi, an analyst at Britain's Royal United Services Institute.

"But we should keep in mind that both the government and the rebels are trying to spin an image of momentum."

In the opposition bastion of Benghazi, a rebel National Libyan Council called for U.N.-backed air strikes on African mercenaries it said Gaddafi was using against his own people.

"We call for specific attacks on strongholds of these mercenaries," said council spokesman Hafiz Ghoga. "The presence of any foreign forces on Libyan soil is strongly opposed. There is a big difference between this and strategic air strikes."

Any sort of foreign military involvement in Arab countries is a sensitive topic for Western nations uncomfortably aware that Iraq suffered years of bloodletting and al Qaeda violence after a 2003 U.S.-led invasion toppled Saddam Hussein.

In a possible response to Western hints that the opposition needs to unify to facilitate rebel links with outside powers, Ghoga added that a former justice minister, Mustafa Abdel, Jalil, would be chairman of the Council which will have 30 members and be based in Benghazi before moving later to Tripoli.

There are fears that the uprising, the bloodiest yet against long-serving rulers in the Middle East, is causing a major humanitarian crisis, especially on the Tunisian border where thousands of foreign workers are trying to flee to safety.

The Libyan leader might do something "desperate" to defend his regime, Italy's industry minister said.

"There is a possibility, indeed a real possibility, that Gaddafi might make a desperate last-ditch attempt to free himself from the siege that he finds himself in," said Paolo Romani on Italian television.

In the Netherlands, the International Criminal Court prosecutor said he begin an investigation into the violence.

Across Libya, tribal leaders, officials, military officers and army units have defected to the rebel cause and say they are becoming more organized, however, Tripoli remains a stronghold for Gaddafi in this oil-producing north African state.

Washington says it will keep pressure on Gaddafi to quit, and is moving ships and planes closer to Libya in what is widely seen as a symbolic show of force. On Wednesday two U.S. amphibious assault ships, the USS Kearsarge and the USS Ponce, passed through Egypt's Suez Canal arriving in the Mediterranean.

The White House said the ships were being redeployed in preparation for possible humanitarian efforts but stressed it "was not taking any options off the table." Gates said: "Our job is to give the president the broadest possible decision space."

"Let's just call a spade a spade. A no-fly zone begins with an attack on Libya to destroy the air defenses ... Then you can fly planes around the country and not worry about our guys being shot down," he told a congressional hearing.

At Ras Jdir on the Tunisia border, thousands of Bangladeshi migrant workers, desperate to leave Libya, pressed up against the gates of the frontier crossing, angry at their government for sending no help.

Groups of West African migrant workers also in the crowd chanted for help and held up the flags of Ghana and Nigeria.