Witness report: In fiery speech, Gaddafi says will not surrender 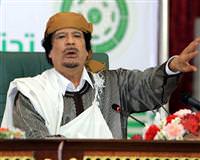 Basking in the adulation of hundreds of adoring supporters, Libyan leader Muammar Gaddafi in a fiery speech Wednesday pledged to crush an escalating uprising against his rule.

Mixing paternalistic notes with furious anti-Western rhetoric, he told a people's congress in Tripoli that Libyans would die by the thousands if foreign powers intervened in the crisis, and blamed "armed gangsters" for the unrest.

"We put our fingers in the eyes of those who doubt that Libya is ruled by anyone other than its people," he said as delegates chanted "God, Muammar, Libya, only."

"We will enter a bloody war and thousands and thousands of Libyans will die if the United States enters or NATO enters," Gaddafi added as I and other journalists sat on the floor just 10 m (yards) away from the man who has ruled Libya for 40 years.

He was given a hero's welcome as he arrived at the heavily guarded complex driving at the head of his motorcade in a tiny golf cart and waving at cheering crowds.

When he entered the building, the crush of people trying to reach him knocked a state television camera broadcasting the speech off the air.

Gaddafi, who has lost swathes of territory and whole cities to rebels, repeated defiantly that he would not step down as leader of the oil-producing North African nation.

"We will fight until the last man and last woman to defend Libya from east to west, north to south," he said.

At times he appeared almost aloof, sometimes sad, and the overall tone was more conciliatory than usual.

He spoke at length about his family, government reform and promised to give people loans at zero interest.

His three-hour speech was interrupted regularly by frantic applause and he was given a standing ovation several times. Some delegates were wearing baseball caps with a picture of Gaddafi.

He made long pauses and listened to the applause with a stony face. Sometimes he tapped on the microphone to signal his impatience with the cheering.

One woman shouted from the audience: "You will not go and you will never leave! You are all that is good!... You are a sword that does not bend!"

Others chanted "We will die for Gaddafi."

At times the Libyan leader showed a softer side, saying he was ready to forgive what he described as confused young people with Kalashnikovs who had been misled by bandits and al Qaeda.

"My assets are human values, the nation, glory, history," he said. "These are assets that are eternal."

The delegates said they loved Gaddafi -- a sentiment that appears to dominate in Tripoli, Gaddafi's last significant stronghold in an unprecedented two-week-old popular uprising against his rule.

"I am happy he is here. We all love him. This is a celebration," said Bashir Zimbil, a university professor.

"The U.S. and Britain are trying to interfere. The West wants our oil. They want to divide and conquer. They will not succeed. Our leader will protect us."

Diplomats from the few countries which have maintained a presence in the country, among them Malaysia, North Korea, Russia and Ukraine, listened and looked a bit uncomfortable.

In the back of the hall, despite the noise, some people slept.