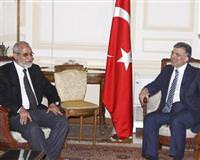 Turkey's President Abdullah Gul said after meeting Egypt's military rulers on Thursday he was convinced the army was serious about piloting a democratic transition following the uprising that toppled Hosni Mubarak.

"I have closely observed that Marshal Tantawi and his friends have seen the expectations and demands of the Egyptian people and youth and they say they will do what is needed in a short period of time," Gul said after meeting Mohamed Hussein Tantawi, head of the military council that took charge in Egypt.

"We believe that this process of transition should end in a way to satisfy all the expectations of Egyptian people. Egypt should switch to a democratic, parliamentary and constitutional system and Egypt should become the strongest state in the region and its people the happiest people, after the process is over."

Gul arrived in Cairo as Egypt's Prime Minister Ahmed Shafiq resigned and a former transport minister was picked to appoint a new government after pro-democracy activists demanded a purge of Mubarak's old guard from the cabinet.

Shafiq was appointed prime minister by Mubarak in his final days in office before he was ousted on Feb. 11 after an 18-day popular uprising which shook the Middle East. There have since been protests and political pressure for Shafiq to step down.
Non-Arab Turkey, a stable and vibrant economy, is often held up in the West as an example of how democracy can flourish in the Muslim world.

Prime Minister Tayyip Erdogan's AK Party, widely expected to win a third term in power at elections in June, has moved from its Islamist roots into an electable mainstream party, operating within a secular constitution.

"In order for a country to be strong it is not enough to have a strong army. You need a strong political system supported by the people and participatory democracy and a strong economy," he told a news conference at the Turkish embassy in Cairo.

Among other leaders he was expected to meet were political reform campaigner Mohamed ElBaradei and Arab League Secretary General Amr Moussa, who has yet to make a formal decision whether he will run for the Egyptian presidency.

Gul said the people he met told him that Turkey was a "great source of inspiration" for its political and economic reforms, and that Turkey could share its experience with Egyptians.

In Turkey, the powerful military has ousted four governments since 1960, and has acted as a final arbiter of power in a parliamentary system that has prevailed since the 1950s. Reforms aimed at winning European Union membership have curbed the generals' power in recent years.

Turkey has become a bigger player in the Middle East, emboldened by its booming economy and a more Islamic identity under Erdogan's AK Party.