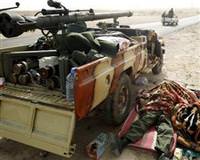 Rebels vowing "victory or death" clashed with Muammar Gaddafi's forces near a key oil terminal and gunfire rang out in the capital as opposition protesters gathered on Friday in the strongman's last bastion.

Eastern-based rebels told Reuters they were open to talks only on Gaddafi's exile or resignation following attacks on civilians that have provoked international condemnation, a raft of arms and economic sanctions and a war crimes probe.

Abdullah al-Mahdi, a rebel spokesman, told Al Jazeera television opposition fighters would attack the capital once a "no-fly" zone was enforced by international powers to try to shatter Gaddafi's grip on the North African oil producer.

Western nations have called for Gaddafi to go and are considering various options including the imposition of a no-fly zone, but are wary about any offensive military involvement to stabilize the world's 12th-largest oil exporter.

In Tripoli, a convoy of 14 sports utility vehicles carrying security forces sped through a checkpoint heading into an area of the capital where demonstrators had staged a protest against Gaddafi's 41-year-old rule.

"They fired teargas. I heard shooting. People are scattering," a Reuters reporter said from the Tajoura district in the east of the capital.

In the east, rebels advanced toward the key Ras Lanuf oil terminal, 600 km (400 miles) east of Tripoli, calling for foreign air strikes to set up a no-fly zone after three days of attacks by government jets.

"Victory or death ... We will not stop until we liberate all this country," Mustafa Abdel Jalil, head of the rebel National Libyan Council told supporters of the two-week-old uprising.

Ahmed Jabreel, an aide to Abdel Jalil, said if there was any negotiation "it will be on one single thing -- how Gaddafi is going to leave the country or step down so we can save lives. There is nothing else to negotiate."

Rebel volunteers defending the opposition's expanding grip on a key coast road said a rocket attack by a government warplane just missed a rebel-held military base which houses a big ammunition store in the eastern town of Ajdabiyah.

The air attacks have failed to stop the rebels using the coast road to push their front line west of Brega, an oil terminal town 800 km (500 miles) east of Tripoli.

Amid growing international concern about dwindling food and medical supplies in some rebel-held areas, diplomatic efforts are accelerating to end a conflict that the West fears could stir a mass refugee exodus across the Mediterranean to Europe.

President Barack Obama said he was concerned a bloody stalemate could develop between Gaddafi and rebel forces but gave no sign of a willingness to intervene militarily.

"Muammar Gaddafi has lost the legitimacy to lead and he must leave," Obama said.The popular uprising against Gaddafi, the bloodiest yet against a long-serving ruler in the Arab world, has knocked out nearly 50 percent of the OPEC-member's 1.6 million barrels of oil per day output, the bedrock of its economy.

The upheaval is causing a humanitarian crisis, especially on the Tunisian border where tens of thousands of foreign workers have fled to safety. But an organized international airlift started to relieve the human flood from Libya as word spread to refugees that planes were taking them home.

Rebels holding the port city of Zawiyah, 50 km (30 miles) west of Tripoli said they had launched counter-attacks against Gaddafi's forces massing in the area and warned supplies of medicines and baby milk were running low.

"Women and children are at home while the men are armed and roam the streets and city limits in anticipation of a major attack by pro-Gaddafi forces," resident Ibrahim told Reuters by telephone, giving only one name.

As international efforts progressed to isolate the Libyan leader, Austria widened an asset freeze list to include a top official at the Libyan Investment Authority, Mustafa Zarti, because of possible ties to Gaddafi's inner circle.

In Zawiyah, residents said Gaddafi's forces had deployed in large numbers over the past days. "We estimate there are 2,000 on the southern side of town and have gathered 80 armored vehicles from the east," resident Ibrahim said, adding a battalion had also come from the west side.

The government says it is not using military force to retake rebel-held cities although one official did not rule it out if all other options were exhausted.

The International Committee of the Red Cross (ICRC) said reports indicated two Libyan Red Crescent ambulances were shot at in Misrata, west of Benghazi, and two volunteers were wounded.

In The Hague, International Criminal Court prosecutor Luis Moreno-Ocampo said Gaddafi and members of his inner circle could be investigated for possible war crimes committed since the uprising broke out in mid-February.

In London, the London School of Economics said it had asked a leading legal figure to investigate its ties to Libya after its director resigned for accepting funding from a charity run by Saif al-Islam.

Howard Davies, a former deputy governor of Britain's central bank who has also held a series of senior positions in the business world, quit late on Thursday after accepting that he had damaged the prestigious college's reputation.

He is the first high-profile British figure to lose his job over commercial ties with Gaddafi.