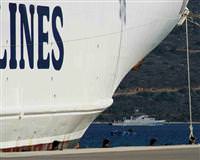 At least three Bangladeshi evacuees from insurrection-hit Libya died in Greek waters while trying to swim to shore from a ship already moored in port, the Greek coastguard said on Sunday.

The incident happened in Souda port on the island of Crete. Two of the victims drowned while the third died from hypothermia. A further 16 people were missing.

About 50 evacuees used a rope to descend from the ship which had already moored at the port to enter Greece illegally, the Civil Protection ministry said in a statement.

The victims, all from Bangladesh, probably tried to avoid being sent back to their home country, according to a coastguard official.

A total of 29 people were hospitalized. Divers were searching the Souda harbor for the missing. A coastguard official said, however, that they might have made it to the shore, escaping inland.

The "Ionian King," a ferry, was carrying a total of 1,288 evacuees from Tripoli, most of them Bangladeshis.

The unrest has heightened worries about a wave of illegal immigration into Europe. Thousands of workers from countries such as Vietnam and China have been evacuated from Libya, many of them on Greek ships.