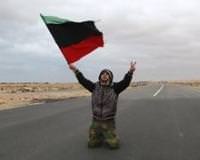 Secretary of State Hillary Clinton has made it clear Washington believes any decision to impose a no-fly zone over Libya is a matter for the United Nations and should not be a U.S.-led initiative.

On Tuesday, Muammar Gaddafi's tanks and warplanes pounded rebel positions in Zawiyah, the closest rebel-held city to the capital, Tripoli.

Rising casualties and threats of hunger and a refugee crisis have increased pressure on foreign governments to act, but many were fearful of moving from sanctions alone to military action.

"We want to see the international community support it (a no-fly zone)," Clinton told Sky News. "I think it's very important that this not be a U.S.-led effort."

She said the United Nations should make the decision on Libya, not the United States.

"We've called for Colonel Gaddafi to leave," she added. "When a leader turns against his own people, that is the end."

U.S. President Barack Obama and British Prime Minister David Cameron agreed the "common objective" was an end to violence and the departure of Gaddafi, the White House said.

In a phone call, the two leaders "agreed to press forward with planning, including at NATO, on the full spectrum of possible responses, including surveillance, humanitarian assistance, enforcement of the arms embargo, and a no-fly zone."

Britain and France are seeking a U.N. resolution to authorize such a zone to ground Gaddafi's aircraft and prevent him moving troops by air. Russia and China, which have veto power in the U.N. Security Council, are cool toward the idea, which would be likely to require bombing of Libyan air defenses.

Hafiz Ghoga, spokesman for the rebel National Libyan Council, told a news conference in the rebel base of Benghazi in eastern Libya:

"We will complete our victory when we are afforded a no-fly zone. If there was also action to stop him (Gaddafi) from recruiting mercenaries, his end would come within hours."

In besieged Zawiyah, 50 km (30 miles) west of Tripoli, trapped residents sheltered from the onslaught of government tanks and aircraft.

Reached by phone in the early hours of Wednesday, a resident called Ibrahim told Reuters: "Zawiyah as you knew it no longer exists. They have been attacking the town from 10 in the morning until 11:30 in the evening."

He said there were dozens of bodies in the street, adding: "There is no electricity, no water and we are cut off from the outside world."

Libyan television showed two of its reporters meeting residents on Tuesday in what it said was "liberated Zawiya."

Rebels still controlled the central square of the town on Tuesday and were using loudhailers to urge residents to defend their positions, said a Ghanaian worker who fled on Tuesday.

"HIDING IN THE STREETS"

A government spokesman insisted troops were mostly in control on Tuesday. "Maybe 30-40 people, hiding in the streets and in the cemetery. They are desperate," he said in Tripoli.

Foreign reporters have been prevented from entering Zawiyah and other cities near the capital without an official escort.

In the east, much of which is under rebel control, warplanes bombed rebel positions around the oil port of Ras Lanuf.

Revolutionary euphoria seemed to have dimmed. "People are dying out there. Gaddafi's forces have rockets and tanks," Abdel Salem Mohamed, 21, told Reuters near Ras Lanuf. "You see this? This is no good," he said of his light machinegun.

Air strikes hit rebels behind the no man's land between Ras Lanuf and Bin Jawad, 550 km (340 miles) east of Tripoli. The towns are about 60 km (40 miles) apart on the strategic coast road along the Mediterranean.

Some government troops who had been besieging the rebel-held city of Misrata left on Tuesday, driving east toward Sirte with pro-Gaddafi forces coming from Tripoli, a resident said by phone.

Sirte, birthplace and stronghold of Gaddafi, lies on the road to the emerging front that divides the country along ancient regional lines, with oil facilities in the middle.

Gaddafi has described the rebels as drug-addled youths and al Qaeda-backed terrorists, and said he would die in Libya rather than surrender.

He visited a Tripoli hotel where foreign journalists are staying late on Tuesday and gave short interviews to French and Turkish television crews.

Early on Wednesday, Libyan television broadcast a speech, recorded a day earlier, by Gaddafi to tribal leaders in Tripoli, his fourth televised address since the uprising began.

Returning to familiar themes, the Libyan leader said the rebels wanted to pave the way for a new colonial era that would allow Britain, France and the United States to divide up the country and control its hydrocarbon wealth.

Referring obliquely to unrest in the Arab world and elsewhere, he said: "How can (Libyan) parents allow Tunisians, Egyptians, Algerians and Afghans to enroll your children?"