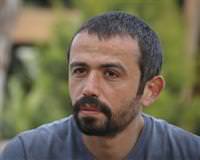 A BBC news team was detained by Libyan security forces, beaten and subjected to mock execution after they were stopped trying to reach the besieged western town of Zawiyah, the British broadcaster said on Wednesday.

The three -- Briton Chris Cobb-Smith, Turkish cameraman Goktay Koraltan, and correspondent Feras Killani, a Palestinian -- said they were accused of spying and had their lives threatened during the 21 hours they were held by soldiers and secret police loyal to Libyan leader Muammar Gaddafi.

They were also beaten with fists, rifles and sticks, and hooded and handcuffed, they said.

Feras, in a statement released by the BBC, said that while in a prison they saw other Libyan captives from Zawiyah who had been beaten and tortured.

Cobb-Smith said at one stage they were lined up against a wall.

"I looked and I saw a plain-clothes guy with a small sub-machine gun. He put it to everyone's neck. I saw him and he screamed at me."

"Then he walked up to me put the gun to my neck and pulled the trigger, twice, the bullets whisked past my ear. The soldiers just laughed."

The crew was arrested on Monday at a checkpoint while on the way to Zawiyah, a rebel-held town about 50 km (30 miles) from Tripoli that has been hotly contested during the uprising against Gaddafi.

They have flown out of Libya following their release.

The government has restricted the movements of foreign journalists based in Tripoli and says they must only travel with official escorts.