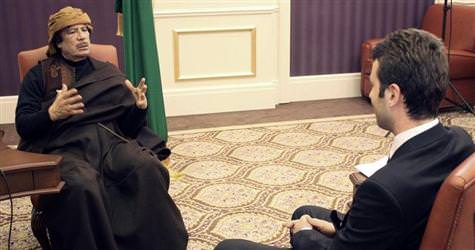 The Libyan people will take up arms against Western powers if they seek to enforce a no-fly zone in the country's airspace, Muammar Gaddafi said.

Britain and the United States have discussed an internationally backed no-fly zone as a contingency plan in case Gaddafi refuses to step down in response to the popular uprising that erupted mid-February.

"If they take such a decision it will be useful for Libya, because the Libyan people will see the truth, that what they want is to take control of Libya and to steal their oil," Gaddafi said in an interview broadcast by Turkey's state-run TRT news channel on Wednesday.

"Then the Libyan people will take up arms against them," Gaddafi said. The interview was conducted in Arabic and aired with Turkish subtitles.

President Barack Obama and British Prime Minister David Cameron agreed in a telephone call "to press forward with planning, including at NATO, on the full spectrum of possible responses, including surveillance, humanitarian assistance, enforcement of the arms embargo, and a no-fly zone."

U.S. Secretary of State Hillary Clinton has made it clear that Washington believes any decision to impose a no-fly zone over the oil-producing desert state is a matter for the United Nations and should not be a U.S.-led initiative.

Gaddafi repeated earlier claims that the revolt was inspired by foreign al Qaeda militants who have paid young men and freed prisoners to fight with them.

He said Western governments and media had been fooled by al Qaeda propaganda into believing that government forces had unleashed violence on Libyan people.

"I'd have to be mad to shoot at peaceful demonstrators. I'd never have done that. I'd never have allowed anyone to be shot," he said in an interview with France's LCI television.

Human rights activists estimate more than 1,000 people have been killed since the uprising began in mid-February.

Gaddafi also complained that the U.N. Security Council was bypassing its own processes to act hastily against Libya.

Returning to accusations that al Qaeda was to blame for the violence, Gaddafi said the international community should realize the consequences.

"The world will change its attitude toward Libya because Libyan stability means the security of the Mediterranean Sea. It will be a huge disaster if al Qaeda takes over Libya," the Libyan leader told TRT.

"Al Qaeda would flood Europe with immigrants. We are the ones who prevent al Qaeda from taking over control. They would drag the whole region into chaos... Al Qaeda would take over North Africa."