U.N. aid agencies shut out from Libya as needs grow 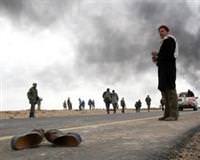 U.N. agencies remain shut out from Libya for security reasons but are increasingly alarmed at sketchy reports of mounting casualties and needs in besieged cities, U.N. officials said on Wednesday.

Satellite imagery has helped them to monitor checkpoints and roadblocks on the way to the border with Tunisia, and thereby track massive refugee flows out of Libya to some degree.

But most of Libya -- where rebels are battling forces loyal to Muammar Gaddafi -- is a black hole for U.N. humanitarian and human rights officials who voice growing frustration in private.

"We are pretty blind. We don't seem to be getting a clear picture of what is going on there," one U.N. official, who asked not to be identified, told Reuters.

The world body said on Saturday that Libyan Foreign Minister Musa Kusa had agreed that a U.N. aid team could come to Tripoli.

Since then, fighting has escalated with a counter-offensive by Libyan forces, preventing U.N. security officials from giving a greenlight for aid workers to deploy. Libyan forces retook the rebel-held western town of Zawiyah on Wednesday.

"As soon as security conditions permit, the U.N. is ready to enter Libya to assess the situation," Elisabeth Byrs, spokeswoman of the U.N. Office for the Coordination of Humanitarian Affairs (OCHA), said.

"We are working on the practical details," she added.

Rashid Khalikov, the newly-appointed U.N. humanitarian coordinator for Libya, arrived in Egypt on Wednesday. But it was not clear whether he would go on to Libya for preliminary talks.

The U.N. has appealed for $160 million for one million people fleeing Libya and inside the country.

The latest U.N. report on Libya reiterated the urgent call for long-haul flights to transport tens of thousands of migrant workers now stranded in Tunisia and Egypt after fleeing Libya.

But under the heading of 'Needs in Libya', it simply read: "Nothing Significant To Report."

The International Committee of the Red Cross -- almost the only international aid agency deployed in Libya -- is limited to the eastern cities of Benghazi and Ajdabiyah. Its surgeons, doctors and nurses are helping treat patients in hospital.

The ICRC is a neutral humanitarian agency whose officials travel in convoys without armed escort, unlike U.N. aid workers. It is seeking to gain access to western Libya, Cardon said.

"We are in touch with all parties to the conflict but don't yet have the necessary (security) guarantees to circulate easily throughout the territory," he said. "Given the worrying reports on fighting in the west we imagine that more people will flee."