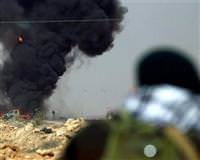 Troops loyal to Libyan leader Muammar Gaddafi were fighting to retake the oil port of Ras Lanuf on Friday, intensifying their counter-offensive against the out-gunned insurgents.

Government forces, with total air superiority and a big advantage in tanks, appear to have regained the momentum in the three-week old conflict and if their push proceeds apace it could overtake sluggish international efforts to halt Gaddafi.

The sound of explosions and small arms fire came from Ras Lanuf on Friday as smoke rose from the town. Rebel forces said they were still inside the residential area of the oil port and fighting government tanks as well as troops who landed by boat.

"Four boats carrying 40 to 50 men each landed there. We are fighting them right now," rebel spokesman Mohammed al-Mughrabi said, but he declined to say exactly where he was.

Rebel fighter Ibrahim al-Alwani said he and his comrades were still in Ras Lanuf and had seen government troops in the town centre. "I saw maybe 150 men and three tanks," he said. "I can hear clashes."

Insurgents withdrew their last main checkpoint in Ras Lanuf on Friday, setting it up 15-20 km (10-13 miles) to the east.

"This is our last checkpoint, ahead are clashes. The clashes are in the residential area (of Ras Lanuf)," rebel fighter Youssef Mohannad told Reuters at the checkpoint.

The insurgents were angry at the international inaction.

"Where is the West? How are they helping? What are they doing," shouted one angry fighter.

West of Tripoli, the revolt in Zawiyah appeared all but crushed, with insurgents clinging to only parts of the shattered city. Residents described scenes of carnage, with women and children among the dead.

One fighter said rebels had retaken the heart of Zawiyah from the army overnight, but authorities have kept journalists away from the town, about 50 km (30 miles) west of Tripoli.

Gaddafi's son Saif al-Islam told the rebels they faced a full-scale assault to crush their uprising which began after Hosni Mubarak was overthrown in neighbouring Egypt a month ago.

"It's time for action. We are moving now," he told Reuters in an interview on Thursday. He said the government had given the rebels two weeks for negotiations. "Time is out now."

"The Libyans are being cleansed by Gaddafi's air force. We asked for a no-fly zone to be imposed from day one, we also want a sea embargo," he said. "We urgently need some arms and we also need humanitarian assistance and medicines to be sent to the cities besieged by Gaddafi troops."

"We are going to step up today in the European Council measures to isolate that regime, and measures to put pressure on that regime, and we should also plan for every eventuality, as I've been arguing now for around two weeks. This is absolutely vital work," Cameron told reporters in Brussels.

France has already recognised the Libyan National Council as the legitimate authority in Libya and French President Nicolas Sarkozy and Cameron urged the European Union to do the same.

The Arab League is holding an emergency session on Libya on Saturday, but it was not clear if could it agree on action due to likely Syrian objections. Gulf Arab states, all members of the Arab League, said on Thursday Gaddafi's government was no longer legitimate and called on the League to impose a no-fly zone.

The African Union, long courted by Gaddafi, rejected foreign intervention, but said it was sending a delegation of five heads of state to Libya soon to try to arrange a truce.

In practice, any military action will require the participation of the United States which, along with NATO, has expressed doubt over the wisdom of imposing no-fly zones without full international backing and a legal justification.

U.S. National Intelligence chief James Clapper said Gaddafi was "in this for the long haul" and was likely to prevail.