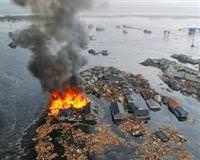 Hawaii ordered evacuations from coastal areas due to the threat of a tidal wave set off by Friday's earthquake in Japan as a tsunami warning was extended to the whole of the Pacific basin, except mainland United States and Canada.

Authorities also ordered evacuation from low-lying areas on the U.S. island territory of Guam in the western Pacific, where residents there were urged to move at least 50 feet above sea level and 100 feet inland.

The U.S. Pacific Tsunami Warning Center said the warning extended from Mexico down the Pacific coast of South America.

The International Federation of Red Cross and Red Crescent Societies warned that the tsunami is currently higher than some Pacific islands which it could wash over.

The quake off Japan's northeast coast was the biggest in 140 years and triggered tsunami waves of up to 10 meters (30 feet) that swept across farmland, sweeping away homes, crops, vehicles and triggering fires.

The tsunami warning issued late on Thursday for Hawaii prompted civil defense officials to order all Hawaiian coastal areas evacuated. The warning said that all islands in the Hawaiian chain were in the path of potential damage from a tsunami generated by the quake.

"Each individual wave crest can last five to 15 minutes or more and extensively flood coastal areas," the advisory statement warned. "The danger can continue for many hours after the initial wave as subsequent waves arrive."

The statement also said that debris carried by a tsunami could amplify its destructive force, said it warned that "urgent action should be taken to protect lives and property."

The state civil defense agency ordered all coastal areas for the entire state evacuated no later than 2 a.m. local time. The evacuation zone includes the famous Waikiki Beach, the main hotel and tourist hub in Honolulu on the island of Oahu, and traffic in the area soon grew heavy.

Lines of cars began to form at gasoline service stations on Oahu as motorists gassed up their vehicles.

In the town of Kailua, police with bullhorns were urging people to higher ground.

Ocean waves up to 6 feet above normal sea level were detected by deep-ocean gauges near Wake island, Midway and Guam in the North Pacific, said Chip McCreary, a spokesman for the Pacific Tsunami Warning Center.

The island of Kauai is expected to be first hit because the tsunami was advancing from the west and would likely take 20 to 30 minutes to cross the entire state, McCreary said.