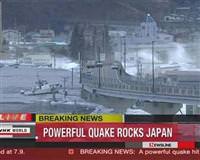 A massive 8.9 magnitude quake hit northeast Japan Friday, causing many injuries, fires and a four-meter (13-ft) tsunami along parts of the country's coastline.

There were several strong aftershocks and a warning of a 10-meter tsunami following the quake, which also caused buildings to shake violently in the capital Tokyo.

TV pictures showed a vast wall of water carrying buildings and debris across a large swathe of coastal farmland.

Public broadcaster NHK showed flames and black smoke billowing from a building in Odaiba, a Tokyo suburb, and bullet trains to the north of the country were halted.

Black smoke was also pouring out of an industrial area in Yokohama's Isogo area. TV footage showed boats, cars and trucks floating in water after a small tsunami hit the town of Kamaichi in northern Japan. An overpass, location unknown, appeared to have collapsed into the water.

Kyodo news agency said there were reports of fires in the city of Sendai in the northeast.

"It was probably the worst I have felt since I came to Japan more than 20 years ago."

Passengers on a subway line in Tokyo screamed and grabbed other passengers' hands. The shaking was so bad it was hard to stand, said Reuters reporter Mariko Katsumura.

Hundreds of office workers and shoppers spilled into Hitotsugi street, a shopping street in Akasaka in downtown Tokyo.

Household goods ranging from toilet paper to clingfilm were flung into the street from outdoor shelves in front of a drugstore.

Crowds gathered in front of televisions in a shop next to the drugstore for details. After the shaking from the first quake subsided, crowds were watching and pointing to construction cranes on an office building up the street with voices saying, "They're still shaking!," "Are they going to fall?"

Asagi Machida, 27, a web designer in Tokyo, sprinted from a coffee shop when the quake hit.

"The images from the New Zealand earthquake are still fresh in my mind so I was really scared. I couldn't believe such a big earthquake was happening in Tokyo."

The U.S. Geological Survey earlier verified a magnitude of 7.9 at a depth of 15.1 miles and located the quake 81 miles east of Sendai, on the main island of Honshu. It later upgraded it to 8.8.

A police car drove down Hitotsugi Street, lights flashing, announcing through a bullhorn that there was still a danger of shaking.

The Tokyo stock market extended its losses after the quake was announced. The central bank said it would do everything to ensure financial stability.

Japan's northeast Pacific coast, called Sanriku, has suffered from quakes and tsunamis in the past and a 7.2 quake struck Wednesday. In 1933, a magnitude 8.1 quake in the area killed more than 3,000 people. Last year fishing facilities were damaged after by a tsunami caused by a strong tremor in Chile.