A Turk in Tokyo jumps out of a window twice! 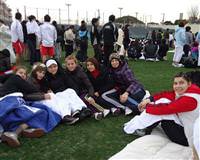 A Turkish national, İbrahim Selimhan Kılıç, who was in Tokyo for the 8.9 magnitude earthquake which took place yesterday, jumped out of his window twice.

Calling in to a live Turkish news broadcast, Kılıç explains, "I live in a city called Toka, located 20 kilometers away from Tokyo. I was at home during the first quake. It was so forceful, I threw myself out the window. When I calmed myself down I finally went back home. However, when it started rattling again, I threw myself out the window for a second time."
DETAILS REVEALED ON FACEBOOK
Turks who have been experiencing the catastrophe in Tokyo minute by minute have shared the following over social networking site Facebook.
FLAMES ARE HITTING MY FACE: (Erman Akyol): I am taking shelter othe roof of my school. I can see a petroleum refinery on fire across from where I am. Even though it is far away, ' so hot it feels like the flames are hitting my face. I was scared, but I'm safe here.
NO CELLULAR SERVICE: (Vaner Alper) A number of people were at work and are now trying to get home. However, there is not transportation working. There is no cellular service. The quake was big and shook horizontally. It went on for so long.
FIRST WE LAUGHED: (Sinan Özgür Mandacı) For the first 30 seconds of the quake we were all laughing. A minute later, we were all under the table. We then spent about an hour outside and then returned to the 18- story building. Everything is okay, we are doing fine.

Meanwhile, Turkey's Women's Judo National Team was in a training camp with Japan's National Team at the time of the quake. Information has arrived that they have safely arrived to their hotel 12-kilometers away after walking for three hours. Ercan Çakıroğlu, coach for the Women's National Judo Team, states; "The earthquake took place as we were entering the gym to train. When the earthquake happened, everyone was taken outside. When we saw how relaxed the Japanese were however, we also got over our fear."