Battle for east Libya swirls around oil town of Brega 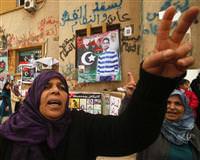 Forces loyal to Muammar Gaddafi and rebels were fighting for control of the oil town of Brega on Tuesday as the battle for eastern Libya edged closer to the insurgent stronghold Benghazi.

"In Brega it is still advance and retreat, we are not in control and they are not either," rebel fighter Hussein al-Wami told Reuters. His report was seconded by fighter Addel Ibriki, who returned to Ajdabiya from Brega on Tuesday morning.

"It is still to and fro," Ibriki said.

Gaddafi's forces have advanced steadily eastwards along the coast to retake towns captured by rebels in the early days of the insurrection against his 41-year-rule.

The poorly-equipped rebels have been outgunned by Gaddafi's tanks, artillery and warplanes and are in danger of being pushed back to Benghazi, headquarters of their provisional national council.

Two government warplanes flew a sortie over Ajdabiyah on Tuesday, with one of them firing two rockets, rebel fighters said.

"There has just been an air strike. There were two planes, only one fired, it was close to the western gate," fighter Ahmed Miftah said.

Gaddafi's forces began bombing and shelling Ajdabiyah on Sunday. The town is a gateway to regions further east and a 400 km (250 mile) desert road offers a clear route straight to Tobruk, near the Egyptian border.

Libyan state television has carried messages saying eastern towns and cities would be or had been "liberated" from the hands of what it calls "armed gangs" and terrorists inspired by al Qaeda.

Since halting the rebel advance, Gaddafi's forces have recaptured the oil towns of Es Sider and Ras Lanuf.