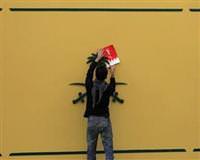 Bahrain's king declared martial law on Tuesday as his government struggled to quell an uprising by the island's Shi'ite Muslim majority that has drawn in troops from fellow Sunni-ruled neighbor Saudi Arabia.

An uneasy calm fell on Bahrain overnight, and a defense ministry statement suggested action against protesters camped out for weeks at Pearl roundabout could be swift. Forces may impose curfews, disperse gatherings and evacuate areas, it said.

The three-month state of emergency hands power to Bahrain's security forces, which are dominated by the Sunni Muslim elite.

Clashes left three dead. A hospital source said two men, one Bahraini and the other Bangladeshi, were killed in clashes in the Shi'ite area of Sitra and more than 200 people were wounded in various incidents.

State television said a Bahraini policeman was also killed, denying media reports that a Saudi soldier had been shot dead.

Over 60 percent of Bahrainis are Shi'ites who complain of discrimination at the hands of the Sunni royal family. Calls for the overthrow of the monarchy have alarmed the Sunni minority, which fears that unrest could serve non-Arab Shi'ite power Iran.

The United States, a close ally of both Bahrain and Saudi Arabia, said it was concerned about reports of growing sectarianism in the country, home to the U.S. Navy's Fifth Fleet. It dispatched Assistant Secretary of State Jeff Feltman to Bahrain to push for dialogue to resolve the crisis.

Speaking in Cairo, U.S. Secretary of State Hilary Clinton said she had told her Saudi counterpart to promote talks to resolve the situation.

"In order for the situation to return to normal we have to establish order and security and ... stop the violations which have spread disturbances among the people of our dear country," said Interior Minister Sheikh Rashed al-Khalifa.

Bahraini state media have said Shi'ite opposition activists, who complain the state has been naturalizing Sunni foreigners to tip the sectarian balance, are targeting foreigners.

The opposition says the security forces are full of naturalized foreigners willing to use force against protesters.

On Monday, more than 1,000 Saudi troops rolled into the kingdom at the request of Bahrain's Sunni rulers. The United Arab Emirates has sent 500 policemen and Qatar said it would also send police.

Thousands of Bahrainis marched on the Saudi embassy in Manama on Tuesday to protest against the intervention.

"People are angry, we want this occupation to end. We don't want anybody to help the al-Khalifa or us," said a protester who gave his name as Salman, referring to the ruling family.

Analysts said the troop movement showed concern in Saudi Arabia that any concessions in Bahrain could inspire the kingdom's own Shi'ite minority.

Iran, which sits across the Gulf from Bahrain, criticized the decision to send in Saudi troops.

"The presence of foreign forces and interference in Bahrain's internal affairs is unacceptable and will further complicate the issue," Foreign Ministry spokesman Ramin Mehmanparast said at his weekly news conference in Tehran.

Bahrain has been gripped by its worst unrest since the 1990s after protesters took to the streets last month, inspired by uprisings that toppled the leaders of Egypt and Tunisia.

Unlike those countries, where the mainly Sunni populations united against the regime, Bahrain is split along sectarian lines, raising the risk of a slide into civil conflict.

The United Nations and Britain echoed the U.S. call for restraint and the Group of Eight powers expressed concern, though analysts said the escalation showed the limits of U.S. influence when security was threatened.

The disturbances are a major blow to the economy in Bahrain, whose oil reserves dwindling. Shops and offices were closed on Tuesday and the streets were deserted.

Fitch cut Bahrain's credit ratings by two notches to BBB from A-minus and said more downgrades were possible in the short term as political risk soared in the country.

Armed youths attacked the printing press of Bahrain's only opposition newspaper Al Wasat overnight, in an effort to stop its publication. Metal barricades and piles of rocks blocked the main road to the financial district and most shops were shut.

Residents have placed skips and pieces of metal on the road, to prevent strangers from entering their neighborhoods. Young men carrying sticks guarded the entrances to their areas.

"We are staying peacefully," said Ali Mansoor at Pearl square. "Our problem is not with Saudi Arabia, it is with the government."