Gaddafi son says revolt will be over in 48 hours 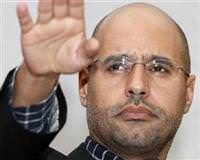 Forces loyal to Libyan leader Muammar Gaddafi are near the rebel stronghold of Benghazi and "everything will be over in 48 hours," Gaddafi's son Saif al-Islam told France-based TV channel Euronews on Wednesday.

He also attacked French President Nicolas Sarkozy for having backed opposition rebels and accused him of having accepted Libyan funds for his election campaign.

Asked about talks among world powers to impose a no-fly zone over Libya, Saif al-Islam said: "The military operations are finished. In 48 hours everything will be over. Our forces are close to Benghazi. Whatever decision is taken, it will be too late."

Gaddafi's forces pushed toward Benghazi, in eastern Libya, on Wednesday as diplomatic efforts to stop him appeared to lose momentum.

A meeting of Group of Eight foreign ministers in Paris this week failed to get the agreement France was hoping for to support a no-fly zone being imposed over Libya, an issue that has also divided the U.N. Security Council.

London-educated Saif al-Islam, seen as Libya's Western-friendly face, lashed out at Sarkozy for being the first foreign leader to condemn Gaddafi and back the rebel Libyan National Council, calling him a "clown."

He said Libya had contributed to Sarkozy's 2007 election campaign financing and demanded he return the money.

Sarkozy's office denied that he had accepted any funding from Libya.

"It's us who financed his campaign and we have the proof. We are ready to reveal everything. The first thing we demand of this clown is to return the money to the Libyan people," Saif al-Islam was quoted as telling Euronews.

"We helped him so that he would work for the Libyan people but he has disappointed us. Give us our money back. We have all the details, the bank accounts, the documents and the transfer operations. We will soon reveal everything," he said.

France, eager to restore an image of leadership in world diplomacy after its clumsy handling of the revolt in Tunisia, stuck its neck out early on Libya, but is now facing the prospect of Gaddafi clinging onto power.

French Foreign Minister Alain Juppe, who tried in vain to persuade his G8 counterparts to back a no-fly zone, wrote on his blog on Wednesday that it was not too late to take action.

"It is not enough to proclaim ... that Gaddafi must go. We have to provide the means to help those who have taken up arms against his dictatorship," he wrote.

"Only the threat of using force can stop Gaddafi. It's by bombing, with his few dozen planes and helicopters, the opposition positions that the Libyan dictator has switched the balance."