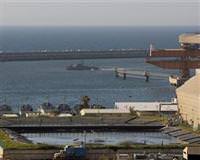 Israeli naval commandos on Tuesday seized a cargo ship in the Mediterranean carrying what Prime Minister Benjamin Netanyahu said were Iranian-supplied weapons intended for Palestinian militants in the Gaza Strip.

A military spokeswoman said Israeli forces met no resistance when they intercepted the German-owned "Victoria" some 200 miles from Israel and were taking the vessel to the Israeli port of Ashdod.

Israel maintains a land and naval blockade of the Gaza Strip, a coastal enclave controlled by Hamas, an Islamist movement opposed to peace with the Jewish state.

The military said the vessel had set off from the Syrian port of Latakia and stopped in Mersin, Turkey, before heading toward Alexandria in Egypt. Turkey has no involvement in the arms shipment, the military said.

Palestinians use a network of tunnels to smuggle weapons and other goods from Egypt into the Gaza Strip.

Netanyahu said he personally approved the operation, which he told reporters was carried out "on the high seas in accordance with international law."

"Many weapons were found on board, intended for terrorist forces in the heart of Gaza," Netanyahu said. "Iran is the source of the weaponry."

Asked about Israel's allegation that it seized Iranian arms on the vessel, Iranian Foreign Ministry spokesman Ramin Mehmanparast said: "Don't trust Israeli media news. There is no such thing. We do not confirm it in any way."

An Israeli military spokesman said an initial search turned up three containers loaded with arms and more cargo would be examined after the ship reached Israel.

Last May, there was an international outcry when Israeli naval commandos seized a Turkish ship that was part of a flotilla trying to break the Gaza blockade.

The soldiers met violent resistance from pro-Palestinian activists when they boarded the cruise vessel Mavi Marmara and killed nine of them, in an incident that strained Israel's ties with Ankara.

In 2009, about 100 miles off Israel's Mediterranean coast, Israeli commandos seized the Francop, a freighter the Israeli military said was carrying hundreds of tonnes of Iranian arms, including rockets, to Lebanon's Hezbollah group.

Nine years ago, Israeli forces intercepted the merchant ship Karine-A in the Red Sea and brought it to the Israeli port of Eilat, where the military displayed 50 tonnes of weapons, including rockets, which Israel said Iran had sent to Palestinian militants.