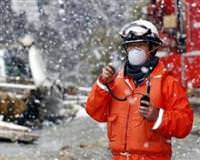 Workers were ordered to withdraw briefly from a stricken Japanese nuclear power plant on Wednesday after radiation levels surged, a development that suggested the crisis was spiraling out of control.

Just hours earlier another fire broke out at the earthquake-crippled facility, which has sent low levels of radiation wafting into Tokyo in the past 24 hours, triggering fear in the capital and international alarm.

Nuclear experts said the solutions being proposed to quell radiation leaks at the Daiichi complex in Fukushima, 240 km (150 miles north of Tokyo, were last-ditch efforts to stem what could well be remembered as one of the world's worst industrial disasters.

"This is a slow-moving nightmare," said Dr Thomas Neff, a research affiliate at the Center for International Studies, which is part of the Massachusetts Institute of Technology.

Panic over the economic impact of last Friday's massive earthquake and tsunami knocked $620 billion off Japan's stock market over the first two days of this week, but the Nikkei index rebounded on Wednesday and was up 4.5 percent.

Nevertheless, estimates of losses to Japanese output from damage to buildings, production and consumer activity ranged from between 10 and 16 trillion yen ($125-$200 billion), up to one-and-a-half times the economic losses from the devastating 1995 Kobe earthquake.

Damage to Japan's manufacturing base and infrastructure is also threatening significant disruption to the global supply chain, particularly in the technology and auto sectors.

Scores of flights to Japan have been halted or rerouted, air travelers are avoiding Tokyo for fear of radiation, and on Wednesday France urged its nationals in the city either to leave Japan or head to the south of the country.

The plight of hundreds of thousands left homeless by the quake and devastating tsunami that followed worsened overnight following a cold snap that brought snow to some of the worst-affected areas.

While the death toll stands at around 4,000, more than 7,000 are listed as missing and the figure is expected to rise.

At the Fukushima plant, authorities have spent days desperately trying to prevent water which is designed to cool the radioactive cores of the reactors from evaporating, which would lead to overheating and possibly a dangerous meltdown.

Concern now centers on damage to a part of the No.4 reactor building where spent rods were being stored in pools of water outside the containment area, and also to part of the No.2 reactor that helps to cool and trap the majority of cesium, iodine and strontium in its water.

Workers were trying to build a road so fire trucks could reach the reactor No. 4, where a fire broke out on Wednesday. Flames were no longer visible at the building housing the reactor, but TV pictures showed rising smoke or steam.

Japanese officials said they were talking to the U.S. military about possible help at the plant.

Concern mounted earlier that the skeleton crews dealing with the crisis might not be big enough or were exhausted after working for days since the earthquake damaged the facility. Authorities withdrew 750 workers on Tuesday, leaving only 50.

All those remaining were pulled out for almost an hour on Wednesday because radiation levels were too high, but they were later allowed to return.

RADIATION IN TOKYO NOT A THREAT TO HUMAN HEALTH

In the first hint of international frustration at the pace of updates from Japan, Yukiya Amano, director general of the International Atomic Energy Agency, said he wanted more timely and detailed information.

"We do not have all the details of the information so what we can do is limited," Amano told a news conference in Vienna. "I am trying to further improve the communication."

Several experts said the Japanese authorities were underplaying the severity of the incident, particularly on a scale called INES used to rank nuclear incidents. The Japanese have so far rated the accident a four on a one-to-seven scale, but that rating was issued on Saturday and since then the situation has worsened dramatically.

France's nuclear safety authority ASN said on Tuesday it should be classed as a level-six incident.

Japanese Prime Minister Naoto Kan on Tuesday urged people within 30 km (18 miles) of the facility -- a population of 140,000 -- to remain indoors, as authorities grappled with the world's most serious nuclear accident since the Chernobyl disaster in Ukraine in 1986.

Officials in Tokyo said radiation in the capital was 10 times normal at one point but not a threat to human health in the sprawling high-tech city of 13 million people.

Levels dropped to minimal on Wednesday, but nerves were shaken by a 6.0 earthquake which shook buildings.

But residents nevertheless reacted to the crisis by staying indoors. Public transport and the streets were as deserted as they would be on a public holiday, and many shops and offices were closed.

Winds over the plant were forecast to blow from the northwest during Wednesday, which would take radiation toward the Pacific Ocean.

Fears of transpacific nuclear fallout sent consumers scrambling for radiation antidotes in the U.S. Pacific Northwest and Canada. Authorities warned that people would expose themselves to other medical problems by needlessly taking potassium iodide in the hope of protection from cancer.

"WHAT THE HELL IS GOING ON?"

Japanese media have became more critical of Kan's handling of the disaster and criticized the government and plant operator Tokyo Electric Power Co. for their failure to provide enough information on the incident.

"This government is useless," Masako Kitajima, a Tokyo office worker in her 50s, said as radiation levels ticked up in the city.

Kan himself lambasted the operator for taking so long to inform his office about one of the blasts on Tuesday. A Kyodo news agency reporter quoted the prime minister demanding the power company executives: "What the hell is going on?."

Nuclear radiation is an especially sensitive issue for Japanese following the country's worst human catastrophe -- the U.S. atomic bombs dropped on Hiroshima and Nagasaki in 1945.

The full extent of the destruction from Friday's earthquake and tsunami was becoming clear as rescuers combed through the region north of Tokyo where officials say at least 10,000 people were killed.

Whole villages and towns have been wiped off the map by the wall of water, triggering an international humanitarian effort of epic proportions.

There have been hundreds of aftershocks and more than two dozen were greater than magnitude 6, the size of the earthquake that severely damaged Christchurch, New Zealand, last month.

About 850,000 households in the north were still without electricity in near-freezing weather, Tohuku Electric Power Co. said, and the government said at least 1.5 million households lack running water. Tens of thousands of people were missing.

NHK offered tips on how to stay warm, for instance by wrapping your abdomen in newspaper and clingfilm, and how to boil water using empty aluminum cans and candles.

Most economists now believe that the Japanese economy, which had been starting to recover when the earthquake struck, will contract in the second quarter of 2011.

A few economists also flagged the risk of a prolonged disruption to consumers and companies and a decline in economic output through 2011 should power outages persist until December.