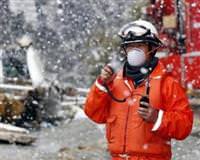 Engineers tried to run power from the main grid to fire up water pumps needed to cool two reactors and spent fuel rods considered to pose the biggest risk of spewing radioactivity into the atmosphere.

While Japanese officials scrambled with a patchwork of fixes, the top U.S. nuclear regulator warned that the cooling pool for spent fuel rods at reactor No.4 may have run dry and another was leaking.

Gregory Jaczko, head of the Nuclear Regulatory Commission, told a parliamentary hearing that radiation levels around the cooling pool were extremely high, posing deadly risks for workers still toiling in the wreckage of the earthquake-shattered power plant.

"It would be very difficult for emergency workers to get near the reactors. The doses they could experience would potentially be lethal doses in a very short period of time," he said in Washington.

The plant operator said it believed the No.4 reactor spent-fuel pool still had water as of Wednesday, and made clear its priority was the spent-fuel pool at the No.3 reactor. On Thursday morning alone, military helicopters dumped around 30 tonnes of water, all aimed at this reactor.

Inside the complex, torn apart by four explosions since a 9.0-magnitude earthquake and tsunami hit last Friday, workers in protective suits and using makeshift lighting tried to monitor what was going on inside the six reactors. They have been working in short shifts to minimize radiation exposure.

U.S. officials took pains not to criticize the Japanese government, which has shown signs of being overwhelmed by the crisis, but Washington's actions indicated a divide with its close ally about the perilousness of the situation.

Japan said the United States would fly a high-altitude drone over the stricken complex to gauge the situation, and had offered to send nuclear experts.

A State Department official said flights would be laid on for Americans to leave, and family of embassy staff had been authorized to leave if they wanted.

Health experts said panic over radiation leaks from the Daiichi plant, around 240 km (150 miles) north of Tokyo, was diverting attention from other life-threatening risks facing survivors of last Friday's earthquake and tsunami, such as cold, heavy snow in parts and access to fresh water.

Sebastian Pflugbeil, president of the private German-based Society for Radiation Protection, said Japan's efforts to pull the Fukushima plant back from the brink signaled "the beginning of the catastrophic phase."

"Maybe we have to pray," he said, adding that a wind blowing any nuclear fallout east into the Pacific would limit any damage for Japan's 127 million people in case of a meltdown or other releases, for instance from spent fuel storage pools.

Low and harmless concentrations of radioactive particles were heading from Japan toward the United States, Lars-Erik De Geer, research director at the Swedish Defense Research Institute, a government agency, said, citing data from a network of international monitoring stations.

A stream of gloomy warnings and reports on the crisis from experts and officials around the world triggered a sharp fall in U.S. financial markets, with all three major stock indexes slumping on fears of slower worldwide growth.

Earlier, one G7 central banker, who asked not to be named, said he was "extremely worried" about the wider effects of the crisis in Japan, the world's third-largest economy.

But German Chancellor Angela Merkel said she does not expect the global economy to be hurt significantly by the catastrophe in Japan, adding also that Germany cannot get by totally without nuclear power in the short term.

G7 finance ministers will hold a conference call early Friday Japan time to discuss steps to help Tokyo cope with the financial and economic impact of the disaster, a source said.

"I don't think stock and currency markets are in a state of turmoil," Yosano said.

The yen surged to a record high against the dollar on market speculation Japan would repatriate funds to pay for the massive cost of post-disaster reconstruction. The yen rose as high as 76.25 per dollar, surpassing the previous record high of 79.75 reached in the wake of the Kobe earthquake in 1995.

Japan's Nikkei average fell sharply on opening on Thursday, but ended the day down just 1.44 percent.

BID TO GET POWER RESTORED TO REACTORS

High radiation levels on Wednesday prevented helicopters from dropping water into reactor No. 3 to try to cool its fuel rods after an earlier blast damaged its roof and cooling system.

Another attempt on Thursday appeared to partly succeed, with two of four water drops over the site hitting their mark. The giant, twin-blade aircraft have to make precisely timed flyovers and drops to avoid the brunt of the radiation.

The plant operator described No. 3 -- the only reactor that uses plutonium in its fuel mix -- as the "priority." Experts described plutonium as a very nasty isotope that could cause cancer if very small quantities were ingested.

Officials from plant operator Tokyo Electric Power Co. (TEPCO) said bulldozers tried to clear a path to the plant so fire trucks could get in and use hoses to cool the facility.

Scores of flights to Japan have been halted or rerouted and air travelers are avoiding Tokyo for fear of radiation.

On Thursday, the U.S. embassy in Tokyo urged citizens living within 80 km (50 miles) of the Daiichi plant to evacuate or remain indoors "as a precaution," while Britain's foreign office urged citizens "to consider leaving the area."

The latest warnings were not as strong as those issued earlier by France and Australia, which urged nationals in Japan to leave the country. Russia said it planned to evacuate families of diplomats on Friday.

Japan's government has told people within 30 km (18 miles) of the plant to stay indoors.

At its worst, radiation in Tokyo has reached 0.809 microsieverts per hour this week, 10 times below what a person would receive if exposed to a dental x-ray. Early on Thursday, radiation levels were barely above average.

But many Tokyo residents stayed indoors, usually busy streets were nearly deserted and many shops were closed.

An unexpected, large-scale power outage was possible in Tokyo and surrounding areas on Thursday evening if power demand exceeded that of the morning, Japan's trade minister said. The earthquake and tsunami cut electricity supplies.

In a possible sign of panic, one bank, Mizuho, said all its automatic teller machines in the country crashed twice during the day after excessive transactions at some branches.

The plight of hundreds of thousands left homeless by the earthquake and tsunami worsened following a cold snap that brought heavy snow to worst-affected areas.

Supplies of water and heating oil are low at evacuation centers, where many survivors wait bundled in blankets.

About 850,000 households in the north were still without electricity in near-freezing weather, Tohuku Electric Power Co. said, and the government said at least 1.5 million households lack running water.

"It's cold today so many people have fallen ill, getting diarrhea and other symptoms," said Takanori Watanabe, a Red Cross doctor in Otsuchi, a low-lying town where more than half the 17,000 residents are still missing.

The National Police Agency said it has confirmed 4,314 deaths in 12 prefectures as of midnight Wednesday, while 8,606 people remained unaccounted for in six prefectures.