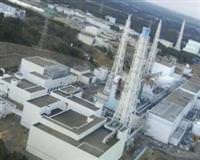 Japanese engineers conceded on Friday that burying a crippled nuclear plant in sand and concrete may be the only way to prevent a catastrophic radiation release, the method used to seal huge leakages from Chernobyl in 1986.

Officials said they still hoped to fix a power cable to at least two reactors to restart water pumps needed to cool overheating nuclear fuel rods. Workers also sprayed water on the No.3 reactor, one of the most critical of the plant's six.

It was the first time the facility operator had acknowledged that burying the sprawling complex was an option, a sign that piecemeal actions such as dumping water from military helicopters were having little success.

"It is not impossible to encase the reactors in concrete. But our priority right now is to try and cool them down first," an official from the plant operator, Tokyo Electric Power Co, told a news conference.

As Japan entered its second week after a 9.0-magnitude earthquake and 10 meter (33-foot) tsunami flattened coastal cities and killed thousands of people, the world's worst nuclear crisis since Chernobyl looked far from over.

Millions in Tokyo remained indoors on Friday, fearing a blast of radioactive material from the complex, 240 km (150 miles) to the north, although prevailing winds would likely carry contaminated smoke or steam away from the densely populated city to dissipate over the Pacific Ocean.

Radiation did not pose an immediate risk to human health outside the vicinity of the plant, said Michael O'Leary, the World Health Organisation's representative in China.

"At this point, there is still no evidence that there's been significant radiation spread beyond the immediate zone of the reactors themselves," O'Leary told reporters in Beijing.

Japan's nuclear disaster has triggered global alarm and reviews of safety at atomic power plants around the world.

President Barack Obama, who stressed the United States did not expect harmful radiation to reach its shores, said he had ordered a comprehensive review of domestic nuclear plants and pledged Washington's support for Japan.

The Group of Seven rich nations, stepping in together to calm global financial markets after a tumultuous week, agreed to join in rare concerted intervention to restrain a soaring yen.

The top U.S. nuclear regulator said it could take weeks to reverse the overheating of fuel rods at the Fukushima Daiichi plant.

"This is something that will take some time to work through, possibly weeks, as you eventually remove the majority of the heat from the reactors and then the spent-fuel pools," Nuclear Regulatory Commission Chairman Gregory Jaczko told a news conference at the White House.

Yukiya Amano, head of the Vienna-based International Atomic Energy Agency (IAEA), arrived in his homeland on Friday with an international team of experts after earlier complaining about a lack of information from Japan.

Graham Andrew, his senior aide, called the situation at the plant "reasonably stable" but the government said white smoke or steam was still rising from three reactors and helicopters used to dump water on the plant had shown exposure to small amounts of radiation.

"The situation remains very serious, but there has been no significant worsening since yesterday," Andrew said.

The nuclear agency said the radiation level at the plant was as high as 20 millisieverts per hour. The limit for the workers was 100 per hour.

Even if engineers restore power at the plant, it was not clear the pumps would work as they may have been damaged in the earthquake or subsequent explosions and there are fears of the electricity shorting and causing another blast.

Japan's nuclear agency spokesman, Hidehiko Nishiyama, said it was also unclear how effective spraying water on the reactors from helicopters had been on Thursday. The priority was to get water into the spent-fuel pools, he said.

"We have to reduce the heat somehow and may use seawater," he told a news conference. "We need to get the reactors back online as soon as possible and that's why we're trying to restore power to them."

Jaczko said the cooling pool for spent-fuel rods at the complex's reactor No.4 may have run dry and another was leaking.

An official at the plant operator said he expected power to be restored at its most troubled and damaged reactors -- No.3 and No.4 -- by Sunday. Engineers are trying to reconnect power to the least damaged reactors first.

The U.S. dollar surged more than two yen to 81.80 after the G7's pledge to intervene, leaving behind a record low of 76.25 hit on Thursday.

Japan's Nikkei share index ended up 2.7 percent, recouping some of the week's stinging losses. It has lost 10.2 percent this week.

U.S. markets, which had tanked earlier in the week on the back of the crisis, rebounded on Thursday but investors were not convinced the advance would last.

The yen has seen steady buying since the earthquake, as Japanese and international investors closed long positions in higher-yielding, riskier assets such as the Australian dollar, funded by cheap borrowing in the Japanese currency.

Expectations that Japanese insurers and companies would repatriate billions of dollars in overseas funds to pay for a reconstruction bill that is expected to be much costlier than the one that followed the Kobe earthquake in 1995 also have helped boost the yen.

The government had warned Tokyo's 13 million residents on Thursday to prepare for a possible large-scale blackout but later said there was no need for one. Still, many firms voluntarily reduced power, plunging parts of the usually neon-lit city in darkness.

The U.S. embassy in Tokyo has urged citizens living within 80 km (50 miles) of the Daiichi plant to evacuate or remain indoors "as a precaution," while Britain's foreign office urged citizens "to consider leaving the area." Other nations have urged nationals in Japan to leave the country or head south.

Japan's government has told everyone living within 20 km (12 miles) of the plant to evacuate, and advised people within 30 km (18 miles) to stay indoors.

At its worst, radiation in Tokyo has reached 0.809 microsieverts per hour this week, 10 times below what a person would receive if exposed to a dental x-ray. On Thursday and Friday, radiation levels were within average levels.

The plight of hundreds of thousands left homeless by the earthquake and tsunami worsened following a cold snap that brought heavy snow to worst-affected areas.

Supplies of water, heating oil and fuel are low at evacuation centers, where many survivors wait bundled in blankets.

About 30,000 households in the north were still without electricity in near-freezing weather, Tohuku Electric Power Co. said, and the government said at least 1.6 million households lacked running water.

The National Police Agency said on Friday it had confirmed 5,692 deaths from the quake and tsunami disaster, while 9,522 people were unaccounted for in six prefectures.