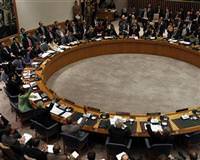 The United Nations authorized military strikes to curb Libyan leader Muammar Gaddafi, hours after he threatened to storm the rebel bastion of Benghazi overnight, showing "no mercy, no pity."

"We will come. House by house, room by room," Gaddafi said in a radio address to the eastern city late on Thursday.

Al Jazeera television showed thousands of people listening to the speech in a central Benghazi square, then erupting in celebration after the U.N. vote, waving anti-Gaddafi tricolors and chanting defiance of the man who has ruled for four decades.

Fireworks burst over the city and gunfire rang out.

But time was clearly running short for the city that has been the heart of Libya's month-old revolution.

French diplomatic sources said military action could follow within hours, and could include France, Britain and possibly the United States and one or more Arab states; but a U.S. military official said no immediate U.S. action was expected.

While other countries or NATO may play roles in military action, U.S. officials expect the United States with its extensive air and sea forces would do the heavy lifting in a campaign that may include airstrikes on tanks and artillery.

Gaddafi warned Benghazi residents that only those who lay down their arms before his advancing troops would be spared the vengeance awaiting 'rats and dogs'.

"It's over. The issue has been decided," Gaddafi said. "We are coming tonight...We will find you in your closets.

"We will have no mercy and no pity."

Residents said the Libyan air force unleashed three air raids on the city of 670,000 on Thursday and there has been fierce fighting along the Mediterranean coastal highway.

Ten of the Council's 15 member states voted in favor of the resolution, with Russia, China and Germany among the five that abstained. There were no votes against the resolution, which was co-sponsored by France, Britain, Lebanon and the United States.

Apart from military action, it expands sanctions against Gaddafi and associates imposed last month. Among firms whose assets it orders frozen are the Libyan National Oil Corp and the central bank.

U.S. President Barack Obama called British and French counterparts David Cameron and Nicolas Sarkozy and agreed to coordinate closely on their next steps.

Libya said the resolution, which also demands a ceasefire by government forces, was not worth the paper it was written on.

"We stand on firm ground. We will not be intimidated by these lies and claims... We will not settle for anything but liberation from this regime."

It was unclear if Gaddafi's threat to seize the city in the night was anything more than bluster. But at the very least it increased the sense that a decisive moment had arrived in an uprising that only months ago had seemed inconceivable.

Some in the Arab world sense a Gaddafi victory could turn the tide in the region, weakening pro-democracy movements that have unseated autocrats in Tunisia and Egypt and raised mass protests in Bahrain, Yemen and elsewhere.

Gaddafi's Defense Ministry warned of swift retaliation, even beyond Libyan frontiers, to any military action against the oil-exporting nation.

"Any foreign military act against Libya will expose all air and maritime traffic in the Mediterranean Sea to danger and civilian and military (facilities) will become targets of Libya's counter-attack," the ministry said in a statement.

John Drake, senior risk consultant at UK-based consultancy AKE said he did not think Gaddafi would strike against oil facilities or oil companies. "He would be hurting himself."

"We don't think they have the capability to impose a no-fly zone over the whole country immediately, although they could try to impose one over Benghazi and maybe also Tripoli," he said.

Proposals for action could include no-fly and no-drive zones, a maritime exclusion zone, jamming army communications and intelligence help. Air strikes would almost certainly be launched to knock out Libyan radar and air defenses.

An Italian government source told Reuters Italy was ready to make its military bases available. The airbase at Sigonella in Sicily, which provides logistical support for the United States Sixth Fleet, is one of the closest NATO bases to Libya.

Past no-fly zones have had mixed success.

The U.N. imposed a no-fly zone over Bosnia in the 1990s, although some analysts say the measure did nothing to stop massacres such as the 1995 slaughter of more than 8,000 Muslim men and boys in the town of Srebrenica.

Former British foreign minister David Owen saw the vote as reflecting a serious division in NATO and the EU, with Germany abstaining and declaring that the venture carried "considerable dangers and risks."

"It's very late for this no-fly zone," Owen said. "Gaddafi's forces are very close to Benghazi and may now push on."

The resolution followed a sharp shift in tone by the United States, which had resisted calls to military action. Diplomats said Washington's change of mind was influenced by an appeal to action by the Arab league and the prospect of a Gaddafi government flush with oil wealth fomenting unrest in the region.

"Mission creep" poses a serious danger. Western powers, chastened by protracted wars in two other Muslim countries, Afghanistan and Iraq, would be wary of getting drawn into any ground action in Libya.

Rebels have retreated over the last two weeks as Gaddafi, dubbed the 'mad dog of the Middle East' by president Ronald Reagan in 1986, has brought air power and heavy armor to bear.

Residential areas of Ajdabiyah, a strategic town on the coast road to Benghazi, were the scene of heavy fighting on Thursday and around 30 people were killed, Al Arabiya reported.

On the approaches to Ajdabiyah, burned-out cars lay by the roadside while Libyan government forces showed the foreign media artillery, tanks and mobile rocket launchers -- much heavier weapons than those used by the rebels.

In Libya's third city, Misrata, about 200 km (130 miles) east of Tripoli, rebels and residents said they were preparing for a new attack by Libyan troops, who had shelled the coastal city overnight. A government spokesman said Gaddafi's forces expected to be in control of Misrata by Friday morning.