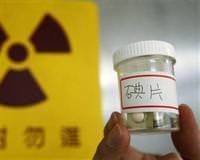 Japanese authorities earlier this week issued a recommendation that people leaving the area near a tsunami-crippled nuclear power plant should ingest iodine, the U.N. nuclear watchdog said on Saturday.

Taken as pills or syrup, stable iodine can be used to help protect against thyroid cancer in the case of radioactive exposure in a nuclear accident.

The International Atomic Energy Agency (IAEA) also said radiation at the damaged Fukushima Daiichi plant had stabilized at "significantly higher" levels than normal, but these were still in a range allowing onsite recovery measures.

At the site on Saturday, engineers attached a power cable to the outside of the facility in a desperate attempt to get water pumps going that would cool down overheated fuel rods and prevent the deadly spread of radiation.

Earlier this week, the Vienna-based U.N. agency said Japan had provided 230,000 units of stable iodine to evacuation centers as a precautionary measure in the nuclear emergency.

Its statement on Saturday said the authorities had successfully completed the evacuation of people from a 20 km zone around the stricken plant. People within a 30 km area have been advised to stay indoors.

The order recommended a single dose of pills for adults and syrup for children -- with the amount dependent on age -- but that it was not necessary for people older than 40.

Radiation levels at the plant spiked three times since last week's earthquake, but have stabilized since March 16, it said.

"Radiation levels near Fukushima Daiichi and beyond have elevated since the reactor damage began," it said.

"However, dose rates in Tokyo and other areas outside the 30-kilometre zone remain far from levels which would require any protective action. In other words they are not dangerous to human health," it said.

A World Health Organization study two decades ago of the 1986 meltdown at Chernobyl, the most recent nuclear accident that affected a large population, estimated that up to 9,000 people could eventually die as a result of radiation exposure from the power plant.

About 4,000 people developed thyroid cancer as a result of the accident, most of whom had been children or adolescents in 1986. But survival rates for this type of cancer are high -- about 99 percent so far, based on figures in Belarus.