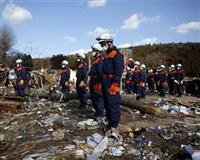 Exhausted engineers attached a power cable to the outside of Japan's tsunami-crippled nuclear plant on Saturday in a desperate attempt to get water pumps going that would cool down overheated fuel rods and prevent the deadly spread of radiation.

Even one bit of good news was quickly dashed, adding to the growing despondency. Media reports said that a young man had been pulled alive from the rubble eight days after the quake and tsunami had ripped through northeast Japan and triggered the nuclear crisis.

It turned out that the man been in an evacuation center and had simply returned to his ruined home, where he lay down alone in a blanket.

Prime Minister Naoto Kan, who has called the crisis the biggest to hit Japan since World War Two, sounded out the opposition about forming a government of national unity to deal with a crisis that has shattered Japan and sent a shock through global financial markets, with major economies joining forces to calm the Japanese yen.

Officials expect to have power from outside drawn to No. 2 reactor first. Then they will test the pump and systems to see if they can be started.

"TEPCO has connected the external transmission line with the receiving point of the plant and confirmed that electricity can be supplied," the plant's operator, Tokyo Electric Power Co, said in a statement.

Nearly 1.5 km (a mile) of cable is being laid before engineers try to crank up the coolers at reactor No.2, followed by numbers 1, 3 and 4 this weekend, company officials said.

"If they are successful in getting the cooling infrastructure up and running, that will be a significant step forward in establishing stability," said Eric Moore, a nuclear power expert at U.S.-based FocalPoint Consulting Group.

If that fails, one option is to bury the sprawling 40-year-old plant in sand and concrete to prevent a catastrophic radiation release. The method was used to the Chernobyl reactor in 1986, scene of the world's worst nuclear reactor disaster.

Underlining authorities' desperation, fire trucks sprayed water overnight in a crude tactic to cool reactor No.3, considered the most critical because of its use of mixed oxides, or mox, containing both uranium and highly toxic plutonium.

Japan has raised the severity rating of the nuclear crisis to level 5 from 4 on the seven-level INES international scale, putting it on a par with the Three Mile Island accident in Pennsylvania in 1979. Some experts say it is more serious.

Chernobyl, in Ukraine, was a 7 on that scale.

The operation to avert large-scale radiation has overshadowed the humanitarian aftermath of the 9.0-magnitude quake and 10-meter (33-foot) tsunami that struck on March 11.

Nearly 7,000 people have been confirmed killed in the double natural disaster, which turned whole towns into waterlogged and debris-shrouded wastelands.

Another 10,700 people are missing, many feared dead.

Some 390,000 people, many elderly, are homeless, living in shelters in near-freezing temperatures in northeastern coastal areas.

Food, water, medicine and heating fuel are in short supply and a Worm Moon, when the full moon is closest to Earth, could bring floods to devastated areas.

"Everything is gone, including money," said Tsukasa Sato, a 74-year-old barber with a heart condition, as he warmed his hands in front of a stove at a shelter for the homeless.

Health officials and the U.N. atomic watchdog have said radiation levels in the capital Tokyo were not harmful. But the city has seen an exodus of tourists, expatriates and many Japanese, who fear a blast of radioactive material.

"I'm leaving because my parents are terrified. I personally think this will turn out to be the biggest paper tiger the world has ever seen," said Luke Ridley, 23, from London as he sat at Narita international airport using his laptop.

Officials asked people in the 20 km "take cover" zone to follow some directives when going outside: Drive, don't walk. Wear a mask. Wear long sleeves. Don't go out in the rain.

Though there has been alarm around the world, experts say dangerous levels of radiation are unlikely to spread to other nations.

The U.S. government said "minuscule" amounts of radiation were detected in California consistent with a release from Japan's damaged facility, but there were no levels of concern.

Amid their distress, Japanese were took some heart from the 279 nuclear plant workers toiling in the wreckage, wearing masks, goggles and protective suits sealed by duct tape.

"My eyes well with tears at the thought of the work they are doing," Kazuya Aoki, a safety official at Japan's Nuclear and Industrial Safety Agency, told Reuters.

The Group of Seven rich nations succeeded in calming global financial markets in rare concerted intervention to restrain a soaring yen -- the first such joint intervention since the group came to the aid of the newly launched euro in 2000.

Japan's Nikkei share index recovered some lost ground by the end of a week which wiped $350 billion off market capitalization.

The government plans to provide up to 10 trillion yen ($127 billion) in cheap loans to help businesses get back on their feet. The plight of the homeless worsened following a cold snap that brought heavy snow to the worst-affected areas, the Nikkei daily reported.

But the immediate problems remained huge for many people. Nearly 290,000 households in the north still have no electricity and about 940,000 lack running water.

Aid groups say most victims are getting help, but there are pockets of acute suffering.

"We've seen children suffering with the cold, and lacking really basic items like food and clean water," Stephen McDonald of Save the Children said in a statement.