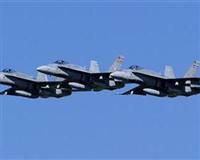 Western nations led by Britain and France prepared on Friday to implement a "no-fly" zone over Libya authorized by the United Nations Security Council to protect civilians against Muammar Gaddafi's forces.

While the United States has not yet said what steps it will take, the Pentagon could bring a host of sophisticated military assets to bear on Libya.

* There are five U.S. combat ships now in the Mediterranean, including two amphibious assault ships, carrying hundreds of Marines, and at least one guided missile destroyer. Those combat ships are accompanied by support ships.

* The United States does not have any aircraft carriers close to Libya. The USS Enterprise, which in recent weeks was stationed in the Red Sea, has been moved eastwards, away from Libya, to join the USS Carl Vinson, in the Arabian Sea to support Afghanistan operations.

* Aviano, south of the Alps in Italy, is the region's only U.S. air base with aircraft assigned to it -- 42 F-16s. The Pentagon has declined to discuss the positioning of other planes in the region.

* But the Air Force said this week it would likely use bombers and fighter planes, possibly including F-16s, F-15s and F-22s, to strike ground targets in Libya if it were to enforce a no-fly zone over Libya.

* There is a range of U.S. military facilities in the Mediterranean region. There are two U.S. naval bases in Greece, at Makri and Soudha Bay, and one air base at Iraklion.

* There are several military installations in Italy, reporting to U.S. European Command, including a naval base near Naples, home to the Sixth Fleet, and the Aviano air base.

* In Spain, an air base at Moron and a naval station at Rota also report to European Command.

* In Turkey, there is a major air base at Incirlik and support facilities at Ankara and Izmir. U.S. Strategic Command also has one Spacetrack Radar at Incirlik.

* Farther away, the Fifth Fleet is headquartered in the tiny Gulf island of Bahrain.

* U.S. Africa Command has a presence in Djibouti, where there is a naval air base.