WHO warns of "serious" food radiation in disaster-hit Japan 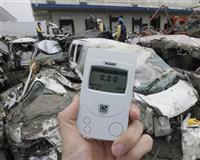 The World Health Organization said on Monday that radiation in food after an earthquake damaged a Japanese nuclear plant was a "serious situation", eclipsing clear signs of progress in a battle to avert a catastrophic meltdown in the reactors.

Engineers managed to rig power cables to all six reactors at the Fukushima complex, 240 km (150 miles) north of Tokyo, and started a water pump at one of them to reverse the overheating that has triggered the world's worst nuclear crisis in 25 years.

Some workers were later evacuated from one of the most badly damaged reactors when gray smoke rose from the site. There was no immediate explanation for the smoke, but authorities had said earlier that pressure was building up at the No. 3 reactor.

The amount of smoke later receded.

The March 11 earthquake and tsunami left more than 21,000 people dead or missing and will cost an already beleaguered economy some $250 billion.

Overshadowing news from the facility, however, was mounting concern that radioactive particles already released into the atmosphere have contaminated food and water supplies.

"Quite clearly it's a serious situation," Peter Cordingley, Manila-based spokesman for the World Health Organisation's (WHO) regional office for the Western Pacific, told Reuters in a telephone interview.

"It's a lot more serious than anybody thought in the early days when we thought that this kind of problem can be limited to 20 to 30 kilometers ... It's safe to suppose that some contaminated produce got out of the contamination zone."

Japan's health ministry has urged some residents near the plant to stop drinking tap water after high levels of radioactive iodine were detected.

Cases of contaminated vegetables and milk have already stoked anxiety despite assurances from officials that the levels are not dangerous. The government has prohibited the sale of raw milk from Fukushima prefecture and spinach from a nearby area.

Cordingley said there was no evidence of contaminated food from Fukushima reaching other countries.

Japan is a net importer of food, but has substantial exports -- mainly fruit, vegetables, dairy products and seafood -- with its biggest markets in Hong Kong, China and the United States.

The World Bank, citing private estimates of between $122 billion and $235 billion for the cost, said the disaster would depress Japanese economic growth briefly before reconstruction kicks off and gives the economy a boost.

Moody's Investors Service said in a report that the downside risks from the crisis had increased over the past week for the country's economy, sovereign credit, banking, insurance and non-financial corporate sectors.

However, in a much-needed boost for Japan's battered stock market, billionaire investor Warren Buffett said the earthquake and tsunami were an "enormous blow" but should not prompt the selling of Japanese shares. Instead, he called the events a "buying opportunity".

"It will take some time to rebuild. But it will not change the economic future of Japan. If I owned Japanese stocks, I would certainly not be selling them," Buffett said during a visit to a South Korean factory run by a company that is owned by one of his funds.

Japan's crisis spooked markets last week, prompted rare intervention by the G7 group of rich nations to stabilize the yen, and fueled concerns the world economy may suffer because of disrupted supplies to the auto and technology industries.

At Fukushima, 300 engineers have worked around the clock inside an evacuation zone to contain the worst nuclear accident since Chernobyl, Ukraine, in 1986.

They have been spraying the coastal complex with thousands of tonnes of sea water so fuel rods will not overheat and emit more radiation. Hopes for a more permanent solution depend on electricity cables reactivating on-site water pumps at each of the six reactors.

The most badly damaged reactors are No. 3 and 4, which were both hit by explosions last week.

U.S. Energy Secretary Steven Chu, asked by CNN whether the worst of Japan's 10-day nuclear crisis was over, said on Sunday: "Well, we believe so, but I don't want to make a blanket statement."

If the cooling pumps cannot restart, drastic measures may be needed like burying the plant in sand and concrete.

The death toll could jump dramatically since police said they believed more than 15,000 people had been killed in Miyagi prefecture, one of four that took the brunt of the tsunami.

The 9.0-magnitude quake and ensuing 10-meter (32-ft) tsunami made more than 350,000 people homeless. Food, water, medicine and fuel are short in some parts, and near-freezing temperatures during Japan's winter are not helping.

While Japanese have been focused on the rescue operation rather than recriminations, media and others have raised questions over the government and plant operator Tokyo Electric Power Company's (TEPCO) performance.

There have been suggestions the nuclear drama was taking priority over the human suffering, and that the early response of some officials was slow and opaque.

TEPCO head Masataka Shimizu apologized at the weekend for "causing such trouble" at the plant but has not visited the site or made a public appearance in a week.