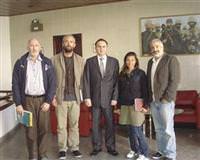 Libya released four New York Times journalists on Monday, nearly a week after they had been captured by Libyan forces while covering the conflict there, although three journalists for other outlets remained missing.

The journalists later gave a frightening account of their ordeal in which they said some of their captors threatened their lives.

The release had been in the works since Thursday, with Turkey serving as intermediary between the U.S. and Libyan governments.

The four, who had been allowed to speak to their families on Thursday, were released to the Turkish embassy in Tripoli and later arrived safely in Tunisia, the Times said.

The United States, lacking a diplomatic presence in Libya at the moment, asked Turkey to represent its interests there as part of the deal to free the journalists, Turkey's ambassador to the United States said.

"Because of the volatile situation in Libya, we've kept our enthusiasm and comments in check until they were out of the country, but now feels like a moment for celebration," Executive Editor Bill Keller said in a statement.

"And before long we'll all know the details of their experience," Keller said.

In an account reported by the Times, the journalists said they were captured at a checkpoint in Ajdabiya by forces loyal to Libyan leader Muammar Gaddafi.

As they were being pulled from the car, rebels fired on the checkpoint, sending the four running for their lives, but they were caught by soldiers, the report said.

"I heard in Arabic, 'Shoot them,'" Shadid said. "And we all thought it was over."

"One of the others said: 'No, they're American. We can't shoot them,'" Hicks said. The four journalists said they were bound and put in a vehicle which stopped repeatedly at checkpoints, where each time a new group of soldiers punched them or struck them in their backs with rifle butts.

One of their captors threatened to decapitate Hicks, and Addario said she was repeatedly groped and told she was going to die.

The United States has formally suspended operations at its embassy in Tripoli and asked Turkey to act as its "protective power" in Libya, ambassador Namik Tan told Reuters.

The Turkish ambassador in Tripoli immediately contacted Libyan authorities to request the release. The handover was delayed a day by the resumption of U.S. and allied air strikes on Tripoli on Sunday.

The group had been traveling through the rebel controlled eastern region of Libya without visas, like many Western journalists, to cover the uprising against Gaddafi, the Times reported. They were detained by forces loyal to Gaddafi on March 15 in Ajdabiya, the paper said.

Three journalists, including two working for Agence France-Presse, have gone missing while covering the fighting in Libya, the news agency said on Sunday.

AFP said in a statement that Dave Clark, a reporter based at its Paris headquarters, and Roberto Schmidt, a photographer in its Nairobi bureau, had not been heard from since they sent an email to senior editors on Friday evening.

They were accompanied by Joe Raedle, a photographer from the Getty Images agency who also had not been heard from since Friday evening, AFP said.