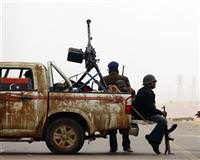 Anti-aircraft fire rang out across Tripoli for a third night but air attacks on Libya are likely to slow, a U.S. general said, as Washington holds back from being sucked into the Libyan civil war.

State television said several sites had come under attack in the capital on Monday. Western powers had no confirmation of new strikes in a U.N.-mandated campaign to enforce a no-fly zone and protect civilians from Muammar Gaddafi's forces.

Rebels, who had been driven back toward their eastern Benghazi stronghold before the air attacks halted an advance by Gaddafi's forces, have so far done little to capitalize on the campaign -- raising fears the war could grind to a stalemate.

But Washington, wary of being drawn into another war after long campaigns in Iraq and Afghanistan, has ruled out specific action to overthrow Gaddafi, though France said on Monday it hoped the Libyan government would collapse from within.

"My sense is that -- that unless something unusual or unexpected happens, we may see a decline in the frequency of attacks," General Carter Ham, who is leading U.S. forces in the Libyan operation, told reporters in Washington.

President Barack Obama, facing questions at home about the United States military getting bogged down in a third Muslim country, said Washington would cede control of the Libyan operation in days.

"We anticipate this transition to take place in a matter of days and not in a matter of weeks," Obama told a news conference during a visit to Chile.

He did not spell out which nation or organization would take charge, but Britain and France took a lead role in pushing for the intervention in Libya. The missile strikes have already been extensive enough to have destroyed much of Libya's air defenses.

Libyan state television reported that several sites in Tripoli had been subject to new attacks by what it called the "crusader enemy." "These attacks are not going to scare the Libyan people," said a state television broadcast.

Anti-aircraft gunfire rang out throughout the night and pro-Gaddafi slogans echoed around the city center. Cars sped through Tripoli streets honking wildly.

Al Jazeera television said radar installations at two air defense bases in eastern Libya had been hit. However, a French armed forces spokesman said France, which has been involved in strikes in the east, had no planes in the air at the time.

Meanwhile, residents in two besieged rebel-held cities in western Libya, Misrata and Zintan, said they had been attacked by Gaddafi's forces. Security analysts have said they believe government troops will try to force their way into civilian areas to escape attack from the air.

In Misrata, residents said people had gone out into the streets to try to stop Gaddafi's forces entering the city.

"When they gathered in the center, the Gaddafi forces started shooting at them with artillery and guns," said the resident, who gave his name as Saadoun. He said nine people were killed.

"New forces were sent today to besiege the city. There are now at least 40 tanks at the foothills of the mountains near Zintan," Abdulrahmane Daw told Reuters by phone from the town.

The reports could not be independently verified.

The United States and its allies have run into some criticism for the intensity of the firepower it unleashed on Libya, including more than 110 Tomahawk missiles on Saturday.

Brazil called late on Monday for a ceasefire in Libya while China once more urged an end to the fighting, expressing "deep concern" at reported civilian casualties.

Libyan rebels have welcomed the air strikes and say they are coordinating with the Western powers launching air strikes.

But there was little sign at the vanguard of battle in east Libya that this communication extended to forward rebel units.

Western powers say they are not providing close air support to rebels or seeking to destroy Gaddafi's army, but rather only protecting civilians, as their U.N. mandate allows, leaving disorganized rebel fighters struggling to make headway.

"If we don't get more help from the West, Gaddafi's forces will eat us alive," rebel fighter Nouh Musmari told Reuters.

Security analysts say it is unclear what will happen if the Libyan leader digs in, especially since Western powers have made clear they would be unwilling to see Libya partitioned between a rebel-held east and Gaddafi-controlled west.

"There is still a real risk of a protracted stalemate, with neither side wanting to negotiate. So the endgame remains very unclear," said Jeremy Binnie, a senior analyst with IHS Jane's.

British Prime Minister David Cameron said the operation would not drag into another Iraq-style conflict.

"This is different to Iraq. This is not going into a country, knocking over its government and then owning and being responsible for everything that happens subsequently," Cameron said during a parliamentary debate on Libya.

"This is about protecting people and giving the Libyan people a chance to shape their own destiny," he said.

In an appearance on Libyan television on Sunday, Gaddafi promised his enemies a "long war".

Officials in Tripoli said that one missile on Sunday, which they said was intended to kill Gaddafi, had destroyed a building in his compound, heavily bombed in 1986 by the United States.

"It was a barbaric bombing," said government spokesman Mussa Ibrahim, showing pieces of shrapnel that he said came from the missile. "This contradicts American and Western (statements) ... that it is not their target to attack this place."

A Libyan government spokesman also said that foreign attacks had killed many people by bombing ports and Sirte airport.

"You saw that place (Sirte airport)," Mussa Ibrahim told a news conference. "It's a civilian airport. It was bombarded and many people were killed. Harbors were also bombarded."

Cameron said there were no plans to target Gaddafi. "The U.N. resolution is limited in its scope, it explicitly does not provide legal authority for action to bring about Gaddafi's removal from power by military means," he told parliament.

"We will help fulfill the U.N. Security Council (resolution), it is for the Libyan people to determine their government and their destiny, but our view is clear, there is no decent future for Libya with Colonel Gaddafi remaining in power."

French Foreign Minister Alain Juppe said he hoped Libyans themselves would topple Gaddafi: "When will the regime collapse? It is quite possible that, given the weakness of the regime, it will break up from within."