West will end in "dustbin of history," Gaddafi says 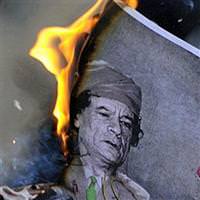 Western powers attacking Libya will end up in the dustbin of history, Muammar Gaddafi said as his troops held back rebels despite four nights of air strikes.

While Western air power has grounded Gaddafi's warplanes and pushed back his forces from the brink of rebel stronghold Benghazi, disorganized and poorly equipped insurgents have failed to capitalize on the ground and remain pinned down.

The rebels have been unable to dislodge Gaddafi's forces from the key junction of Ajdabiyah in the east, while government tanks are besieging the last big rebel hold-out of Misrata. There is big risk of stalemate on the ground, analysts say.

At least two explosions were heard in the Libyan capital Tripoli before dawn on Wednesday, Reuters witnesses said. The roar of a fighter jet was heard above the city followed by a barrage of anti-aircraft gunfire.

"We will not surrender," Gaddafi earlier told supporters forming a human shield to protect him at his Tripoli compound.

"We will defeat them by any means ... We are ready for the fight, whether it will be a short or a long one ... We will be victorious in the end," he said in a live television broadcast, his first public appearance since the air strikes began.

"This assault ... is by a bunch of fascists who will end up in the dustbin of history," Gaddafi said in a speech followed by fireworks in the Libyan capital as crowds cheered and supporters fired guns into the air.

The Libyan government denies its army is conducting any offensive operations and says troops are only defending themselves when they come under attack, but rebels and residents say Gaddafi's tanks have kept up their shelling of Misrata in the west, killing 40 people on Monday alone, and also attacked the small town of Zintan near the border with Tunisia.

It was impossible to independently verify the reports.

The siege of Misrata, now weeks old, is becoming increasingly desperate, with water cut off for days and food running out, doctors operating on patients in hospital corridors and many of the wounded left untreated or simply turned away.

"The situation in the local hospital is disastrous," said a Misrata doctor in a statement. "The doctors and medical teams are exhausted beyond human physical ability and some of them cannot reach the hospital because of tanks and snipers."

The rebel effort in east Libya meanwhile was bogged down outside Ajdabiyah, with no movement on the strategic town since Gaddafi's remaining tanks holed up there after the government's armored advance along the open road to Benghazi was blown to bits by French air strikes on Saturday night.

Hiding in the sand dunes from the tank fire coming from the town, the rebels are without heavy weapons, leadership, communication, or even a plan.

While Western countries remain reluctant to commit ground troops who could guide in close air strikes, it remains to be seen whether the rebel's bravado and faith in God can take towns and advance toward their target of capturing Tripoli.

Western warplanes have flown more than 300 sorties over Libya and more than 162 Tomahawk cruise missiles have been fired in the United Nations-mandated mission to protect Libyan civilians against government troops.

Defense analysts say the no-fly zone over Libya could end up costing the coalition more than $1 billion if the operations drags on more than a couple of months.

Obama said the allies should be able to announce soon that they have achieved the objective of creating the no-fly zone.

But, he said, Gaddafi would present a potential threat to his people "unless he is willing to step down."

"We will continue to support the efforts to protect the Libyan people. But we will not be in the lead," Obama said.

Obama, facing questions at home about the Libyan mission, duration and cost, wants the United States to give up operational control of enforcing the no-fly zone within days.

France had been against a NATO role for fear of alienating Arab support, while Turkey had also opposed the alliance taking command as it said air strikes had already overstepped what was authorized by the United Nations. But both countries' objections had been overcome, U.S. officials said.

The plan is for NATO's command structure to be used for the operations under the political leadership of a "steering body" made up of Western and Arab nations members of the alliance policing Libya's skies, diplomats said.

French Foreign Minister Alain Juppe said foreign ministers of countries taking part in military action in Libya were set to meet in the coming days to create a clear political structure for operations.

"I've proposed with the agreement of our British colleagues that we set up a political structure to guide operations, involving foreign ministers from countries that are taking part and from the Arab League," Juppe told the French parliament.

Libya ordered the release of three journalists who had been missing in the country, including two working with Agence France-Presse and a Getty Images photographer, Getty said.