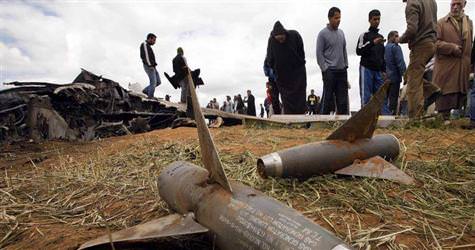 A century later, Turkey appears headed for Libya. The government will seek parliamentary approval today to dispatch soldiers. Turkey intends to send five ships and one submarine to assist in an arms embargo. Two of the ships are already in the open sea near Libya.

French President Nicholas Sarkozy's resistance to recall operations has resulted in Foreign Affairs Minister Ahmet Davutoğlu insisting to his French, English and American counterparts, "The sole control and command should be with NATO. We cannot share in the responsibility of an operation referred to as a Crusade." Should the crisis not be averted, NATO will not be joining in the air operations in Libya, Should the crises be surpassed, however Turkey will send five ships and one submarine as well as airplanes to the region. Turkish planes will in no way hit targets, however they will be patrolling and providing protection for ships enforcing the arms embargo. At 14:00 today, the government will first brief Turkey's Grand National Assembly and then request authorization for the parliamentary motion. NATO has been officially informed of Turkey's preparations to send five ships and one submarine to Benghazi to enforce the arms embargo. Reinforcement has been sent to the region in order to prepare for the necessary sea conditions should the motion be passed by the parliament today. In addition to the two ships that are already in the Mediterranean, an additional two ships have also set sail.
100-YEARS LATER
Turkish soldiers are headed for Libya as NATO, in accordance to the 1970 and 1973 U.N. motions. One hundred years ago, Turkey fought against Italy in the Turco-Italian War of 1911, now they join forces in the same area for the same front.
F-16'S ARE READY
Turkey is planning to send ships from the first ever 'open sea fleet' established last year as part of the Turkish Sea Duty Group, or TDGG, to survey the arms embargo. Stated to resemble the famous American sixth fleet, TDGG plans to send four frigates and one fuel ship to the region. According to Navy Forces Commander Admiral Eşref Uğur Yiğit, two ships are already in the open Mediterranean Sea, and an additional ship and a logistical support ship have also set sail. Explaining that they are preparing the necessary conditions to implement the motion, should it be passed by parliament, Yiğit states, "The TCG Giresun and the TCG Gemlik frigates were already in the Mediterranean. We have now sent the TCG Yıldırım." The frigates will operate entirely offshore and therefore a support ship, the TCG Akar, is also being sent to provide logistics. Should the parliamentary motion be approved, Turkey will also help provide air support. Six F-16 and one tanker plane is ready to be dispatched to the region as part of the 2003-established NATO Response Force, in order to rapidly intervene in a possible international crisis.
THREE OBJECTIVES
ARMS EMBARGO: Turkey will first and foremost be in charge of enforcing the arms embargo in place for the Benghazi port. Therefore, the objective is also to prevent Libya's division. While Turkey is extremely concerned regarding Gaddafi's distribution of weapons to the public as well as the arming of the opposition, they plan to take an active role in implementing the arms embargo. The planes, which will be providing security for the ships, will open fire in the case of an attack.
NO-FLY ZONE: Turkey wants the alliance to be the sole authoritarians of a no-fly zone implemented in Libya. The purpose of which would be to ensure Libyan civilians are protected and a ceasefire is establlished as soon as possible. Turkey has also announced that they are prepared to offer operational and logistic support for a no-fly zone.
HUMANITARIAN AID: Turkey has also officially announced plans to contribute to providing humanitarian aid to Libya. However, how the coordination of delivering aid will be conducted will be clarified by NATO in the upcoming days. A cargo plane, cobra helicopters and a hospital ship are expected to provide assistance to the Libyan public.