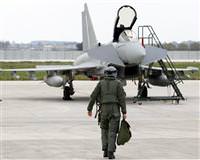 Western governments inched closer to a deal on Wednesday over who should lead military operations against Muammar Gaddafi's forces in Libya, with France saying NATO will have only a "technical role."

Ambassadors of the alliance met again to decide on the extent of NATO involvement in the U.N.-mandated mission to enforce a no-fly zone and protect civilians, with the United States keen to hand over command within days.

After four nights of air strikes, Gaddafi remained defiant, vowing that Western powers engaged in military action in Libya would "end up in the dustbin of history."

Washington, London and Paris agreed on Tuesday that the alliance should play a key operational role, but the assent of all 28 NATO states is needed and they have been split over whether it should also exercise political control.

Turkey, a Muslim NATO member, says the air campaign has already gone beyond the scope of last week's U.N. Security Council resolution. There was no immediate word of whether Ankara would accept a compromise at NATO on Wednesday.

However, Brigadier Pierre Saint-Amand of NATO's military staff told a media briefing Turkey was sending five warships and a submarine to join a separate NATO operation off Libya to enforce a U.N. arms embargo.

France, which launched the air campaign against Libya with Britain and the United States on Saturday, argues that having the U.S.-led NATO in charge would erode Arab support because of the alliance's unpopularity in the Arab world.

French Foreign Minister Alain Juppe said representatives of the countries taking part in the coalition, plus the African Union, the Arab League and associated European countries, would hold a "contact group" meeting in London next Tuesday. That would give Arab partners a share in the political leadership.

NATO agreed on Tuesday to enforce the arms embargo and completed plans to enforce the no-fly zone if needed, but has yet to make a decision on whether to implement the latter.

NATO spokeswoman Oana Lungescu said the allies were consulting on whether and how to implement the plan. No decision had yet been taken, but "NATO is ready to act if and when required," she told a regular media briefing.

One possible model would be the NATO-led International Peace Assistance Force (ISAF) in Afghanistan, in which non-NATO participants get a seat in the political steering group.

"For reasons of efficiency, we want a single command structure to run the coalition action, and NATO has such capabilities, so we must use its resources," French government spokesman Francois Baroin said after a cabinet meeting in Paris.

"We are working to ensure that the coalition continues to retain the political leadership," Baroin said. "Talks with our allies are being finalized. It's not quite nailed down yet."

The United States, Britain, Italy and Norway all want NATO in charge. Turkey, which opposed the intervention in Libya, has said the alliance role should be subject to several conditions, including an end to military campaign as soon as possible.

"The line we now have is that NATO should have a key role in the command structure... that's a little bit short of the lead role, but different from where France was a couple of days ago," the diplomat said.

Obama, under domestic pressure to limit U.S. involvement, said on Tuesday he had "absolutely no doubt" a deal would be reached soon.

The question of handing over leadership of the Libya mission is crucial for Obama, who has stressed limited U.S. involvement to both voters and lawmakers worried about getting tied down in another Muslim country in addition to Iraq and Afghanistan.

NATO said the arms embargo mission involved a command-and-control ship from Italy, four frigates from Turkey and one each from Britain, Spain, Greece, Italy, Canada and the United States; submarines from Spain, Italy and Turkey, and auxiliary ships from Italy and Turkey.

"This is to cut off the flow of arms and armed mercenaries to the Gaddafi regime," spokeswoman Lungescu said.

"The Libyan regime has a track record of acquiring weapons and hiring mercenaries and we also have intelligence reports this activity is continuing, so it's quite important that NATO now takes action to stop this as part of broad international community efforts to stop violence against the people."