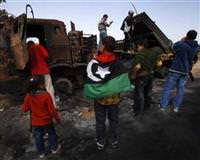 Western warplanes hit Libya for a fifth night on Thursday, but so far have failed to stop Muammar Gaddafi's tanks shelling rebel-held towns or dislodge his armor from a strategic junction in the east.

Gaddafi's tanks rolled back into Misrata under the cover of darkness and began shelling the area near the main hospital, residents and rebels said, resuming their attack after their guns were silenced in daylight hours by Western airstrikes.

Government snipers in the city, Libya's third largest, were undeterred by the bombing raids though and had carried on firing indiscriminately throughout, residents said. A rebel spokesman said the snipers had killed 16 people.

"Government tanks are closing in on Misrata hospital and shelling the area," said a doctor in Misrata who was briefly reached by phone before the line was cut off.

It was impossible to independently verify the reports.

A loud explosion was heard in the Libyan capital Tripoli early on Thursday and smoke could be seen rising from an area where a military base is situated.

Libyan officials took journalists to a Tripoli hospital early on Thursday to see what they said were the charred bodies of 18 military personnel and civilians killed by Western warplanes or missiles overnight.

The U.S. military said it had successfully established a no-fly zone over Libya's coastal areas and had moved on to attack Gaddafi's tanks. The allies flew 175 sorties in 24 hours, with the U.S. flying 113 of those, a U.S. commander said.

Britain said on Thursday it had launched guided Tomahawk missiles from a Trafalgar class submarine at air defense targets as part of the coalition plan to enforce the resolution.

The U.N. Security Council resolution he said, "stipulates that the coalition has all means available to protect the civilians. What's threatening the population today is the tanks and artillery," he said in an interview with Le Figaro.

The Libyan government denies its army is conducting any offensive operations and says troops are only defending themselves when they come under attack.

But a resident in Zintan, southwest of Tripoli said Gaddafi forces were bringing up more troops and tanks to bombard the rebel-held town. Rebels forces in the east meanwhile were still pinned down outside the strategic junction at Ajdabiyah after more than three days of trying to recapture it.

Libyan state television said Western planes had struck in Tripoli and in Jafar, southwest of the capital.

"Military and civilian targets were attacked by colonialist crusaders," the television said.

Libyan government officials have accused Western powers of killing dozens of civilians, but have not shown reporters in the capital any evidence of such deaths. U.S. military officials deny any civilians have been killed in airstrikes.

NATO IN FOURTH DAY OF TALKS

While the fighting raged, NATO again failed to agree to take over command of the military operations from the United States, chiefly because of objections from Turkey, diplomats said.

The United States, with its forces already tied up in Iraq and Afghanistan, said it wants to give up its lead role in Libya in a "matter of days" and wants NATO to play an important role in the command of the operation, though the exact structure of its role was still under discussion.

"I think this is going to be a matter of days in which you see a movement toward the transition with regard to command and control," a top aide to President Barack Obama told reporters.

Washington, London and Paris agreed on Tuesday that the alliance should play a key operational role, but the assent of all 28 NATO states is needed. Objections from Muslim NATO member Turkey have held up agreement on the alliance's role for three days and a fourth day of talks in Brussels is due on Thursday.

Turkey said it did not want NATO to take responsibility for offensive operations that could cause civilian casualties or be in charge of enforcing a U.N.-mandated no-fly zone while coalition aircraft were simultaneously bombing Libyan forces.

France wants an ad hoc steering group of coalition members, including the Arab League, to exercise political control. All nations are welcome to join, a French presidential source said.

"We need to have a place where all those who want to commit to help Libyans build a future can meet and discuss a political framework," he said. "It's about accompanying the military process with a political one."

The group is due to meet in London next Tuesday.

"We've launched the idea of a contact group and apparently it's a big success," the French source said.