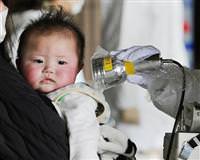 Workers who were burned trying to cool a crippled Japanese nuclear plant were exposed to radiation levels 10,000 times higher than normal, officials said on Friday, but they played down suggestions that a reactor was leaking.

A rupture in a reactor would mean a serious reversal following days of slow progress in containing radiation leaks after a killer earthquake and tsunami tore through the Fukushima nuclear power complex two weeks ago.

Over 10,000 people were killed and 17,500 remain missing in the disaster, according to latest police figures. But even those numbers have been eclipsed by the possibility of a catastrophic meltdown at Fukushima, just 250 km (150 miles) north of Tokyo.

More than 700 engineers have been working in shifts around the clock to stabilize the six-reactor Fukushima complex but they pulled out of some parts when three workers replacing a cable at the No. 3 reactor were exposed to high contamination Thursday, officials said.

Two were taken to hospital with possible radiation burns after radioactive water seeped over their boots.

"The contaminated water had 10,000 times the amount of radiation as would be found in water circulating from a normally operating reactor," said Japanese nuclear agency official Hidehiko Nishiyama.

"It is possible that there is damage to the reactor."

But Nishiyama later told reporters: "It could be from venting operations and there could be some water leakage from pipes or from valves, but there is no data suggesting a crack."

However, adding confusion to the picture, plant operator Tokyo Electric Power Co said it was possible the contaminated water had come from the reactor's core.

Also Friday, Japan prodded tens of thousands of more people living near Fukushima to leave, while China said two Japanese travellers arriving in the country were found to have exceedingly high radiation levels.

Hideo Morimoto, director at the Agency for Natural Resources and Energy, also said the incident at the No. 3 reactor was not serious.

"I feel if the pressure vessel has been seriously damaged, then far more radiation would have leaked," he said.

However, the reactor is also the only one to use plutonium in its fuel mix, which is more toxic than the uranium used in the other reactors.

U.N. nuclear watchdog IAEA said a total of 17 workers had received elevated levels of radiation at Fukushima since the operations began, but said the other 14 did not suffer burns.

China's General Administration of Quality Supervision, Inspection and Quarantine said two travellers who arrived in the eastern city of Wuxi from Tokyo were found to have high levels of radiation although they presented no risk to others.

"Tests showed that the two travellers seriously exceeded the limit," it said in a statement.

Until now, no one in Japan except workers at the stricken plant has been found with seriously elevated radiation levels, and Japan's foreign ministry noted that as of March 18 the International Civil Aviation Association had declared that screening of airline passengers from Japan was not necessary.

Japan's chief cabinet secretary said 130,000 people living near Fukushima should consider leaving, although he insisted it was because getting supplies to the region was difficult and maintained it was not an evacuation order.

"Given how prolonged the situation has become, we think it would be desirable for people to voluntarily evacuate in order to meet their social needs," Yukio Edano said.

Japan evacuated a 20-km (12-mile) zone around the Fukushima nuclear plant after the March 11 earthquake and tsunami. Seventy thousand people left their homes.

Edano has maintained there was no need currently to expand the evacuation zone, but an official at the Science Ministry confirmed that daily radiation levels in an area 30 km (18 miles) northwest of the plant exceeded the annual limit.

Safety fears at the plant and beyond -- radiation particles have been found as far away as Iceland -- are compounding Japan's worst crisis since World War Two.

Despite the increased radiation reports, there has been some progress in containing the crisis at Fukushima.

Two of the reactors are now regarded as safe in what is called a cold shutdown. Four remain volatile, emitting steam and smoke periodically, but work is advancing to restart water pumps needed to cool fuel rods inside those reactors.

The United States has been offering aid to its ally Japan, and two of its barges will together provide 525,000 gallons (2.0 million liters) of water for cooling the reactors.

But heightened by widespread public ignorance of the technicalities of radiation, alarm has been spreading.

Vegetable and milk shipments from the areas near the plant have been stopped, and Tokyo's 13 million residents were told this week not to give tap water to babies after contamination from rain put radiation at twice the safety level.

It dropped back to safe levels the next day, and the city governor cheerily drank water in front of cameras at a water purifying plant.

Despite government reassurances and appeals for people not to panic, there has been a rush on bottled water and shelves in many Tokyo shops remained empty of the product Friday.

In the latest contamination finds, Kyodo reported that radioactive caesium 1.8 times higher than the standard level was found in a leafy vegetable grown at a Tokyo research facility.

Experts say radiation leaking from the plant is still mainly below levels of exposure from flights or dental and medical x-rays.

Nevertheless, South Korea, Taiwan, Singapore, Australia, the United States and Hong Kong are all restricting food and milk imports from the zone. Other nations are screening Japanese food, and German shipping companies are simply avoiding the nation.

In Japan's north, more than a quarter of a million people are in shelters. Exhausted rescuers are still sifting through the wreckage of towns and villages, retrieving bodies and pulling out photos for the consolation of survivors.

Amid the suffering, though, there was a sense that Japan was turning the corner in its humanitarian crisis. Aid flowed to refugees, and phone, electricity, postal and bank services began returning to the north, albeit sometimes by makeshift means.

Owners of small businesses began cleaning up their premises in the worst-hit areas.

"Everybody on this block has the firm belief that they are going to bring this thing back again," said Mario Kariya in the town of Kamaishi, as he cleaned the family-owned Kariya Coffee of debris.

The estimated $300 billion damage from the quake and tsunami makes this the world's costliest natural disaster. Global financial market jitters over Japan's crisis have calmed, though supply disruptions are affecting the automobile and technology sectors.

Foreigner investor buying of Japanese shares actually reached a record high in the week after the disaster, data showed, as bargain-hunters leaped in when stocks first plunged.